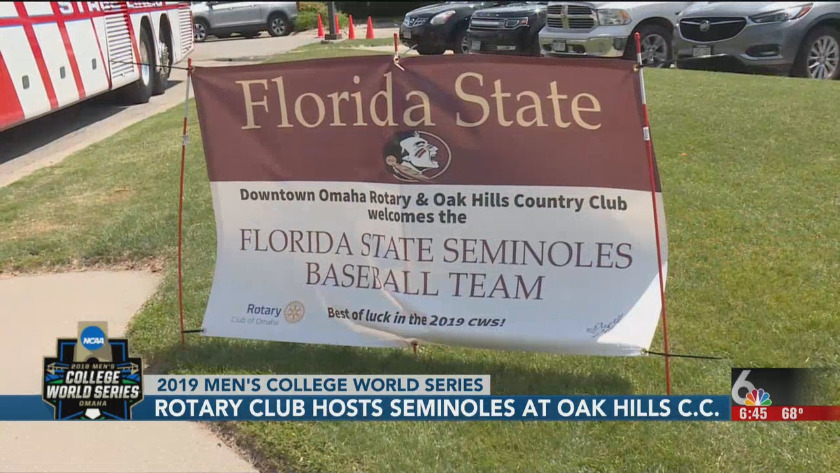 The Florida State Seminoles took a day off from the diamond and visited the Oak Hills Country Club on Sunday. The Omaha Downtown Rotary Club hosted the Noles for a driving competition and a putting contest. This has been a tradition every June by the Rotary Club.

Downtown Rotary Club member Jim Stewart said "We have been doing this a long time Ross I think it started back in the mid to late 1960's, where the service clubs hosted a team each year but we are at the team beck and call. They came right from practice we fed them, and they are out here hitting golf balls a driving contest I believe our golf pro has a range finder to see how far they hit these things, we also have a putting contest next, and they will be here as long as the coach lets them be here."

Florida State Head Coach Mike Martin said: "Today is just a perfect getaway for the guys the hot dogs and hamburgers were just fantastic the people out here at Oak Hills have been extremely nice to us, we are just having a big old time out here watching a bunch of amateurs hit a golf ball five miles.(laughs)"

The relationship between the College World Series and the service clubs has become a model, when cities host NCAA championships.

Stewart said: "Its a model that has worked so well for the College World Series so much, so that the NCAA tries to duplicate it for other events but it just does not work as well, as it does for baseball."

Omaha family excited for the return of Little League