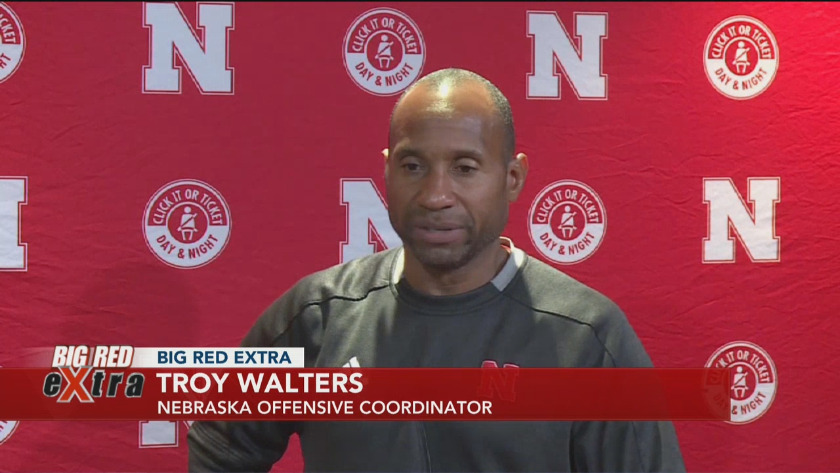 The Husker offense is trying to build off its performance in the 34-31 loss at Colorado. Nebraska Offensive Coordinator Troy Walters spoke with the media after Wednesday's practice.

Coach Walters said: "We had a couple of explosive runs. It is one of those things where we have to be patient, take the…three [or] four-yard runs and then wear them down with our tempo and our speed. Then second half, the big yards should come about. We were good on the perimeter with our outside runs, but we have got to be better [at] inside runs. These guys (Northern Illinois) do a lot of slanting and twisting so there will be some opportunities…for some big runs. In the terms of the run, we have to get the whole run game going- inside, outside, everything."

Coach Walters is impressed with the Northern Illinois defense, that the Huskers will face on Saturday.

Coach Walters said:"They are going to make some plays in the backfield. We have to try to limit the bad plays, the negative yardage plays, but they play hard. It is probably a good opponent to play after a tough loss like we had. You pop on their film, you put on their tape and they catch your eye. They catch your attention because they are flying around. They are going to stack the box, they are going to put seven, eight guys in the box close to the line of scrimmage. They play hard. They came here a couple of years ago and beat Nebraska, so we are not taking them lightly. We have had a great week of preparation but, we have to understand that that type of defense. They are going to make some plays…We have to be dialed in up front and we have to be dialed into their movements."

Coach Walters is looking for more receivers to make an impact on Saturday.

Coach Walters said: "We are just looking for guys to make plays. Whether it is to take the top off, whether it is take a five-yard hitch and make a couple guys miss and turn it into a 20-or-30-yard gain, we are just looking for more guys to contribute, to make plays because teams are going to start doubling JD (Spielman) and we need other guys to be ready to go. Like I said before, we have had a great week of practice with the other receivers and I know if their number is called they will be ready to go."

Kickoff is set for 7 p.m. with television coverage provided by FS1.