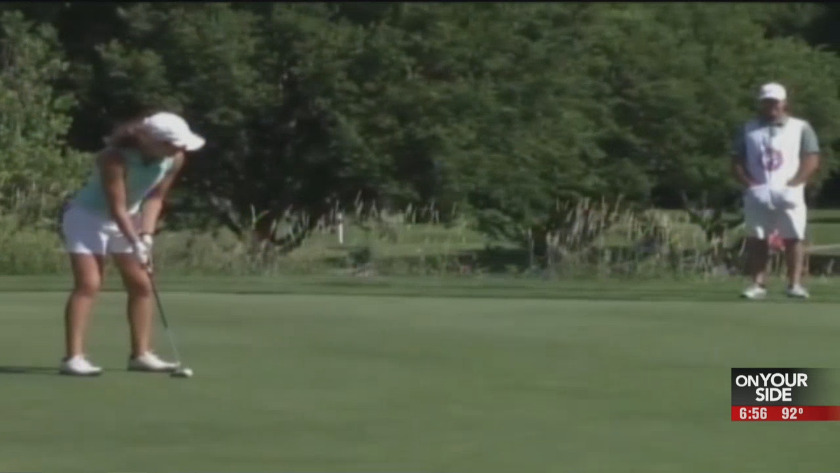 The Husker golfer built a huge lead during the final round, and had breathing room even after making two triple-bogeys in three holes to start her back nine. Thiele made two birdies on the front nine to turn in 34 (-1), stretching her lead, which began at eight, to 12 strokes.

She hit her tee shot out-of-bounds on No. 10, and then found more trouble on the par-5 12th hole, dropping six shots in the stretch. However, it didn’t take her long to recover, as she hit a long drive on the par-5 13th hole and nearly made eagle. She tapped in for her birdie and stuck her tee shot on the par-3 14th to make it back-to-back birdies. She finished with a back nine 42 (+7) to post a final round 76 (+6) for her eight-stroke victory at 220 (+10).

A junior golfer was the closest competitor to Thiele. Danica Badura, a soon-to-be senior at Aurora High School, shot the best round of the day, a 74 (+4). The University of South Dakota commit made two birdies and six bogeys during her final round to earn runner-up honors at 228 (+8).

A couple of Husker teammates finished in a tie for third at 230 (+20), Kirsten Baete of Beatrice and Megan Whittaker of Elkhorn. Baete, the 2016 Nebraska Girls’ Amateur Champion, shot a final round 78 (+8) and Whittaker, a two-time Nebraska Girls’ Match Play Champion, posted a closing 76 (+6). North Platte’s Baylee Steele, another junior golfer, shot one of the best rounds of the day, a 75 (+5) to get into fifth place at 235 (+25).

Three flight winners were crowned in the Non-Championship Division as well. Elkhorn’s Sarah Nordlund won the First Flight with a 169 (+21) total, while Bev Guzinski of Tekamah won the Second Flight at 191 (+43). Cairo’s Pat Hancock closed out the Third Flight with a two-day total of 224 (+76).