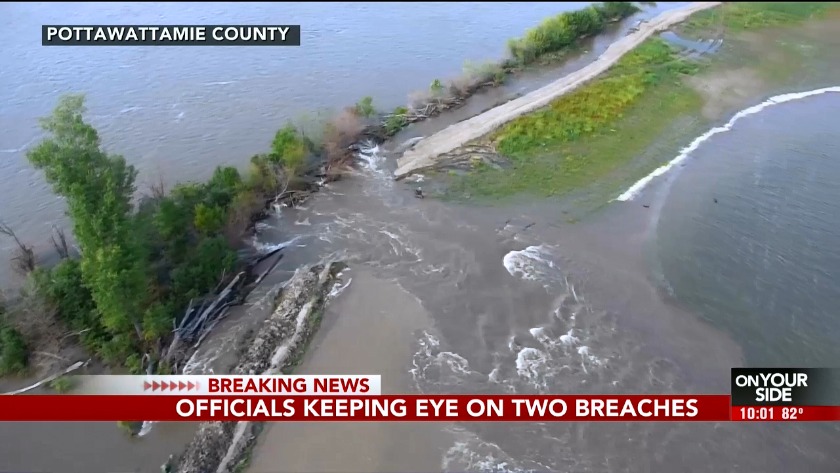 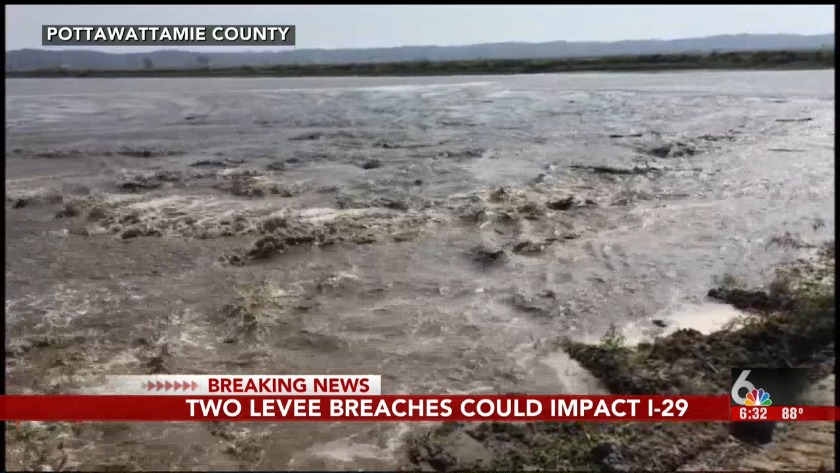 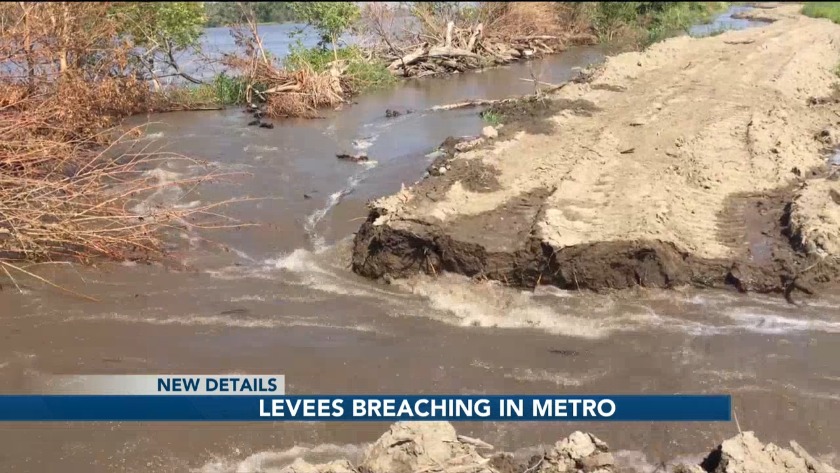 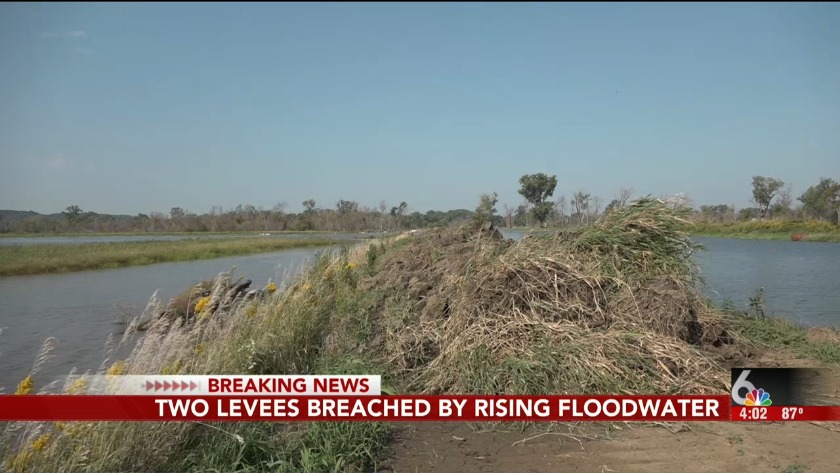 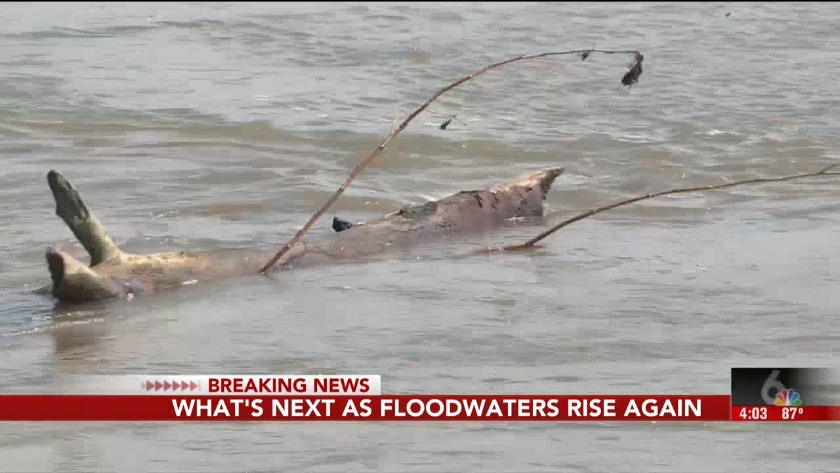 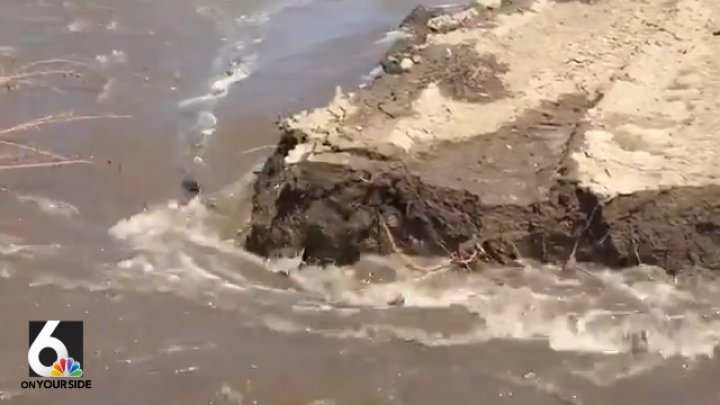 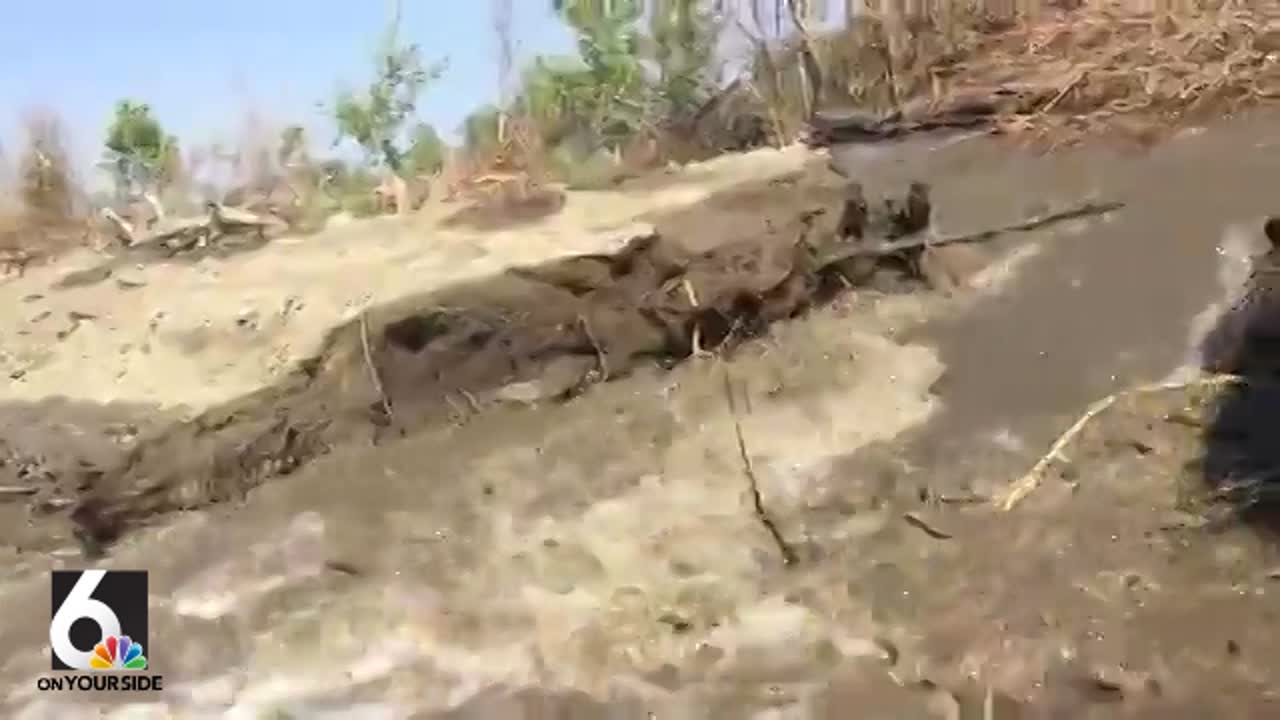 POTTAWATTAMIE COUNTY, Iowa (WOWT) -- Pottawattamie County Emergency Management was advising residents living near the Honey Creek levee to be prepared to leave their homes after a second levee west of the Honey Creek exit on Interstate 29 broke Wednesday afternoon.

Pottawattamie County Emergency Management said around 1:45 p.m. Wednesday, Sept. 18, 2019, that the Honey Creek levee — a major levee that held during flooding in March — has breached and was advising nearby residents to be prepared to leave their homes. (Tara Campbell / WOWT)

During Wednesday morning's commute, drivers were still able to travel through the low-lying stretch of I-29, but just off the Honey Creek exit, there were roads under water.

But around 1:45 p.m. Wednesday, officials said the Honey Creek levee — a major levee that held during flooding in March — had breached and that residents near the area had been sent emergency messages.

Doug Reed, the county's Emergency Management Director, said the messages advised residents of the area — and anyone who doesn't feel safe there — to leave. He said mandatory evacuations won't be ordered because the affected area is small: about 40 homes.

It's the second breach Wednesday after waters broke through a patched levee just a little further north. 6 News was on-site as crews were working to build that levee up along the Missouri River.

At 3:37 p.m., Iowa Department of Transportation tweeted that I-29 would remain open through the evening commute despite the breach near the Honey Creek exit.

"Conditions could change quickly, so If you're planning to travel on I-29 north of Council Bluffs, check 511ia.org or the 511 app for updates," the tweet said.

I-29 near mile post 66 (Honey Creek area) will remain open through the evening commute despite a levee breach. Conditions could change quickly, so If you're planning to travel on I-29 north of Council Bluffs, check https://t.co/2XHJbG5B9b or the 511 app for updates. pic.twitter.com/YuuI6BJBwt

A man with the drainage district told 6 News Wednesday morning that “they have lost the battle,” and water had begun to run from the river, through the levee, and onto farmland.

ALERTS: Sign up for emergency notifications from Pottawattamie County

Water will then be likely headed towards Interstate 29, authorities said.

In a release Wednesday afternoon, county officials urged residents living in the areas south of the Boyer and Missouri River confluence southward to I-680; from the Missouri River to just east of I-29 along 152nd street; and south to Old Mormon Bridge Road to monitor conditions closely Wednesday afternoon and into the evening and be prepared to leave the area should conditions worsen.

Water levels in Pottawattamie are rising. This is 145th Street near Honey Creek. The roadway is now covered by water. pic.twitter.com/9kXeGi3Ckc

Here we go again... Be prepared for detours!

The river is rising and the landscape will be changing yet again. DOT is monitoring and ready to react to keep the motoring public safe.

Please be patient, courteous, and mindful of road closures and follow the designated detours.

For context: The bumpy video is me running atop the levee toward the breech. To the left is the Missouri River. To the right (east) is a farm field, where the water is rushing onto. It’s headed toward I-29 about a mile and away.

This is the Honey Creek levee we’re refereeing to. I was out there this morning and everything looked fine. ⁦@WOWT6News⁩ pic.twitter.com/4n6bB8A4zc