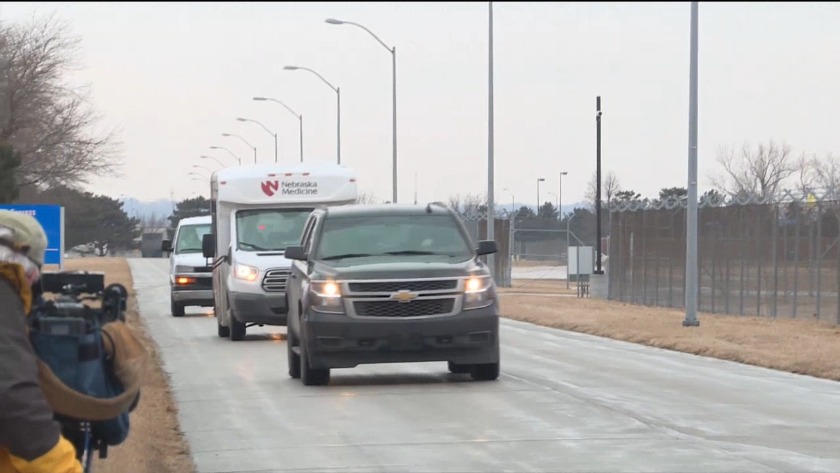 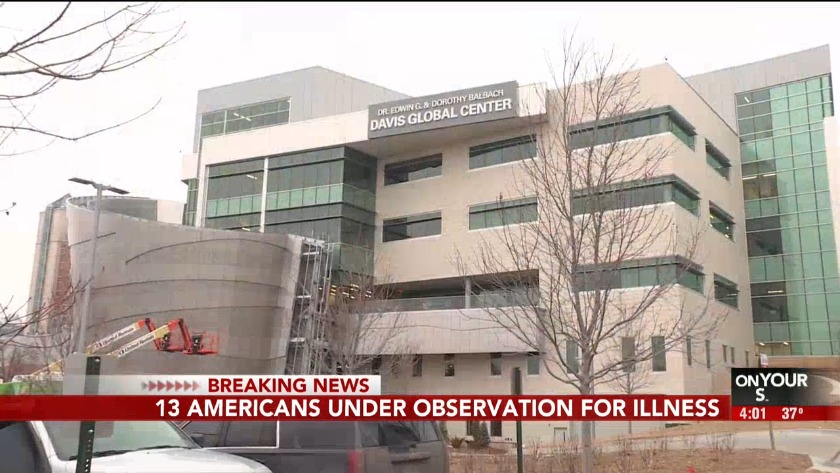 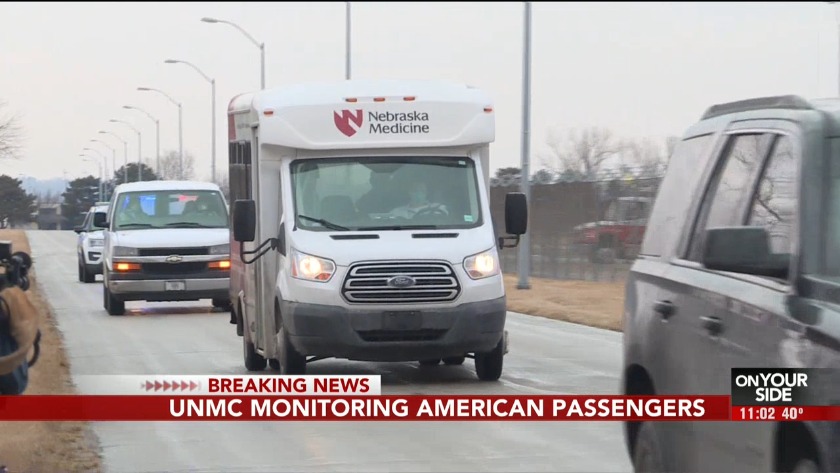 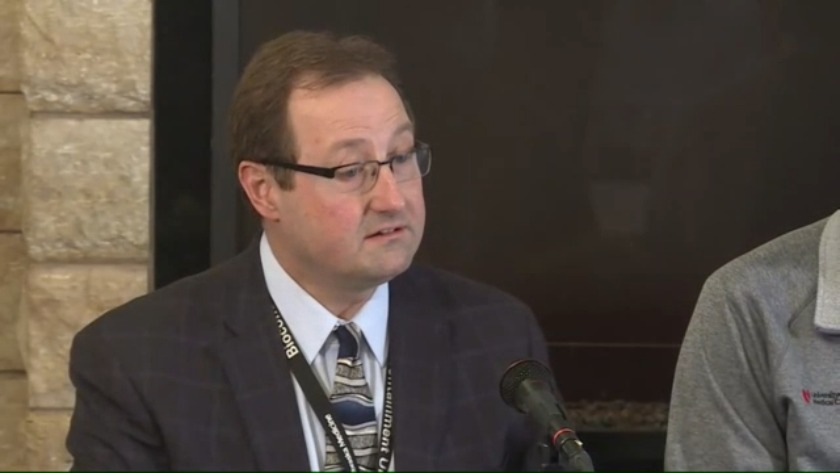 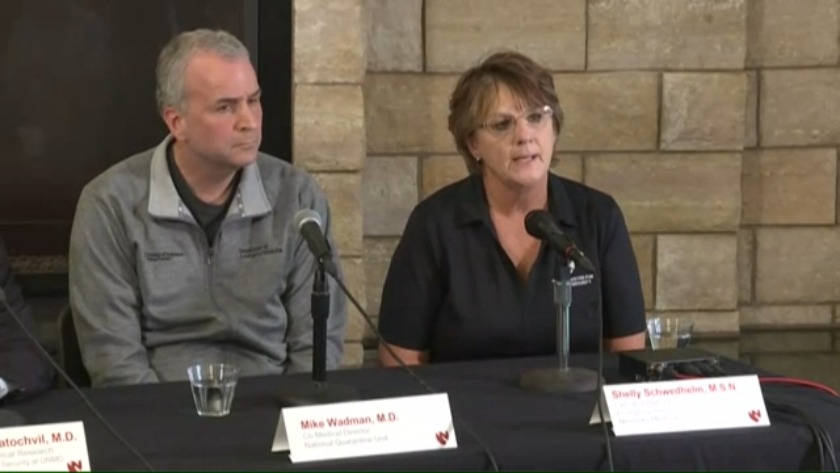 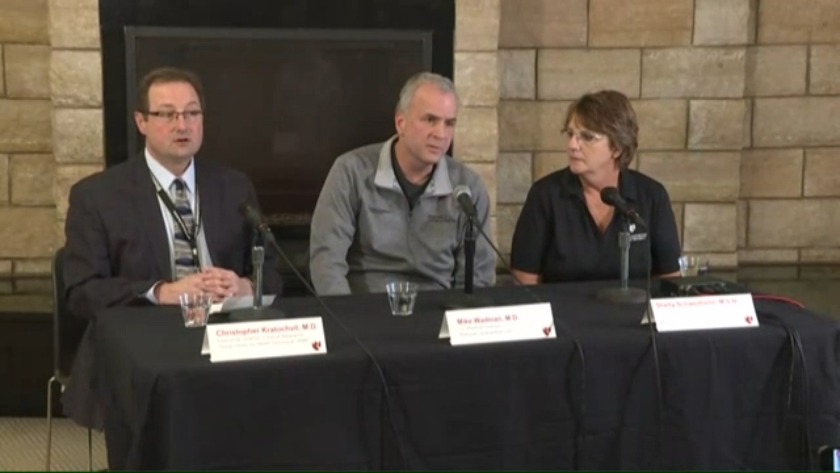 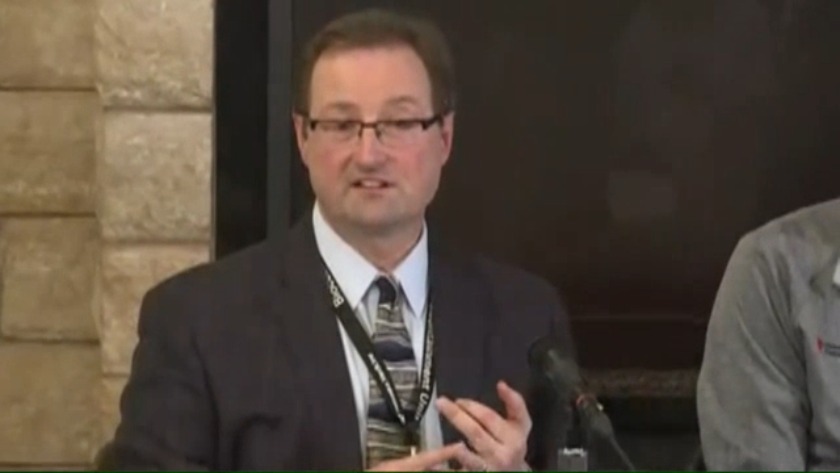 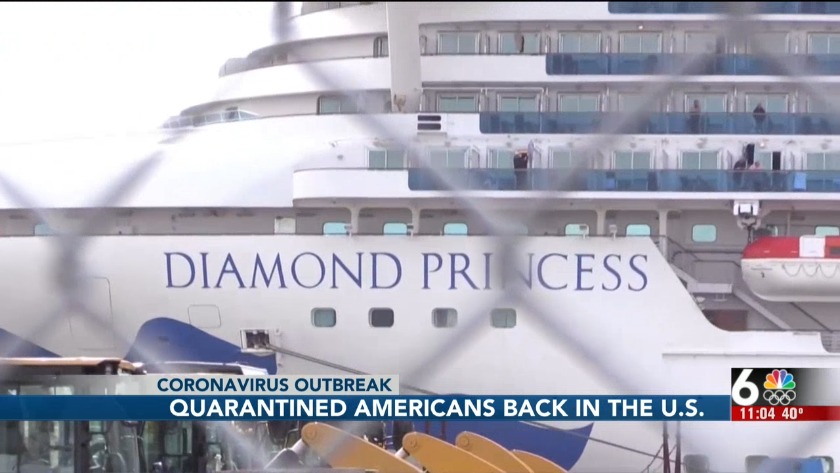 Cruise ship passengers from Japan back in U.S.

OMAHA, Neb. (WOWT) -- Thirteen people in need of further testing for the coronavirus arrived in Omaha on Monday morning and were transported to UNMC's National Quarantine Unit — the same place a woman quarantined for coronavirus at Camp Ashland was taken on Friday.

Authorities confirmed with 6 News that a handful of people arriving at Eppley Airfield on Monday morning were transported to UNMC's National Quarantine Unit — the same place a woman quarantined for coronavirus at Camp Ashland was taken on Friday. (WOWT)

Doctors here are awaiting the results of testing done once the patients arrived at UNMC. Those results will determine how officials will guide the patients in the future.

"Anything prior to this, we’ve got no documented information," said MSN Shelly Schwedhelm, executive director of emergency management and biopreparedness at Nebraska Medicine. "It's all been verbal, and that’s why we’re going through and doing the additional testing of everyone at this time."

All the patients who arrived Monday will spend at least 14 days in the National Quarantine Unit at the UNMC/Nebraska Medicine campus.

RELATED: Why are scientists so concerned about the new coronavirus?

Officials said the group came from a cruise ship located off Japan's coast. More than 300 U.S. citizens on that ship were at high-risk for exposure to the virus, and were evacuated.

Nebraska Medicine officials said at a news conference Monday afternoon that they were keeping a close eye on the situation off the coast of Japan, and that they were ready to help in the ship's evacuation plan.

Some of the patients who arrived in Omaha did show symptoms of novel coronavirus.

Thirteen adults in the National Quarantine Unit at UNMC have tested either positive or likely to test positive for COVID-19.

One person was taken to biocontainment, quarantine officials said. The patient had lightheadedness, cough, and mild fever, and was also suffering from a chronic condition that could complicate their care should they test positive for coronavirus.

The other 12 are asymptomatic and were brought to the quarantine unit at UNMC because testing in Japan deemed them high-risk, officials said.

"Those who have tested positive for this novel coronavirus are only showing mild symptoms of the disease," according to a release distributed at the news conference.

All brought to UNMC's National Quarantine Unity on Monday will be here for 14 days, officials said. If they test positive for coronavirus, they will stay longer.

The unit has a 20-bed capacity.

Officials in Omaha received a call from the Office of the Assistant Secretary of Preparedness Response at about 2 a.m. Monday letting them know that quarantined people would be routed there.

"Late last night, about 2 or 3 this morning, we were asked to bring some individuals here — individuals who had tested positive or had a high likelihood of testing positive because of symptoms they were exhibiting," Kratochvil said.

The call did not come as a surprise; local officials had been in contact with preparedness response officials over the weekend that such a call may come. Local officials had a briefing Sunday about some details in order to give advance warning of the possibility of the new quarantined arrivals.

Thirteen people arrived at Eppley Airfield on two planes Monday morning. They had been American passengers of cruise ship Diamond Princess, which was under a 14-day quarantine in Japan for coronavirus.

Earlier on Monday, authorities had confirmed with 6 News that a handful of people arriving at Eppley Airfield on Monday morning were transported to UNMC's National Quarantine Unit — the same place a woman quarantined for coronavirus at Camp Ashland was taken on Friday.

Two flights from the same airline that earlier this month brought 57 people quarantined for coronavirus to Omaha from China landed at Eppley Airfield on Monday morning.

People in containment suits were seen around the flights. Sources confirmed with 6 News that a handful of people on the flights were taken to UNMC.

The Associated Press reported earlier this morning that a plane carrying American passengers from the Diamond Princess, a cruise ship that was quarantined in Japan landed at a Northern California air force base just before midnight Sunday, A second flight touched down at a San Antonio air force base around 2.5 hours later, early Monday.

A joint statement from the U.S. Department of State and U.S. Department of Health and Human Services confirmed 14 Diamond Princess passengers tested positive for COVID-19 a couple days ago, and that those passengers were scheduled to deplane at Travis AFB or a base in San Antonio and remain under quarantine for two weeks.

"Passengers that develop symptoms in flight and those with positive test results will remain isolated on the flights and will be transported to an appropriate location for continued isolation and care," the DHHS release states.

Local authorities initially referred 6 News questions about the flights to federal authorities, who said there's not a plan to move more evacuees to Camp Ashland.