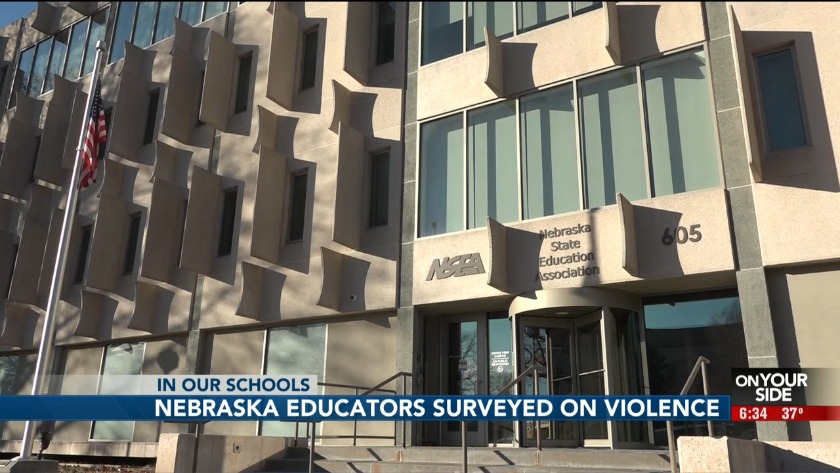 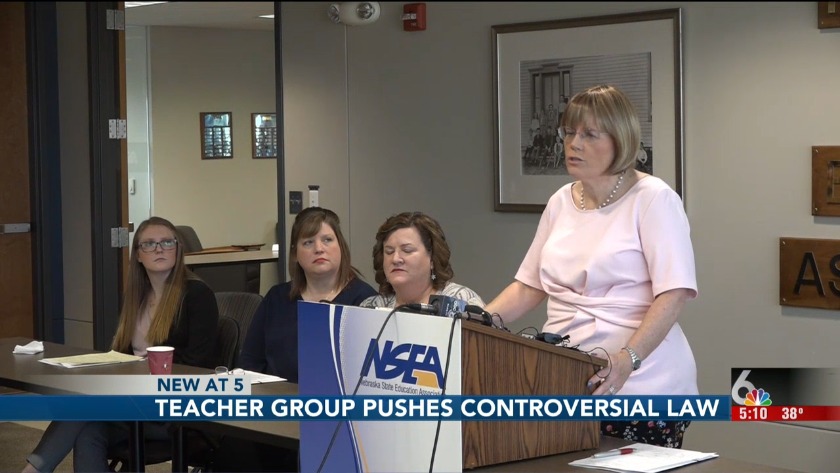 LINCOLN, Neb. (WOWT) -- Teachers in Nebraska may soon have the right to physically discipline students they feel are acting out in a threatening way.

The Nebraska State Education Association on Thursday, Jan. 2, 2020, talked about the need for teachers in the state to have the right to physically discipline students they feel are acting out in a threatening way. (Tara Campbell / WOWT)

LB147 would allow teachers to physically remove a student from the classroom if they are believed to have become a safety threat. The organizations pushing for the bill are digging in deeper as lawmakers get set to go back to work.

The Nebraska State Education Association, which is pushing for the bill, said it is digging deeper into the issue as lawmakers get set to go back to work.

NSEA asked teachers to talk about their experiences with violent behavior Thursday in a plea for help from lawmakers to protect them and their classrooms. The stories provide evidence of the need to give teachers this power, NSEA representatives said.

Three weeks ago, the NSEA sent out a survey to educators asking them about their experience with violent behavior in the classroom. The organization's president said they received more than 160 responses.

State Sen. Mike Groene introduced LB147 last winter. Although it did not get enough votes to move it out of committee, it was pulled onto the floor in May.

The teachers also asked for more training on de-escalation and trauma fo all educators and administrators. Plans are in place to introduce legislation to provide funds to train teachers on how to physically intervene with a student if necessary.

Meanwhile, ACLU Nebraska, The Arc of Nebraska, Voices for Children, and the Nebraska Council of School Administrators issued a statement Thursday urging lawmakers "to do everything they can to limit physical use of force in the classroom."

Those organizations say such actions are often used disproportionately against students of color or those with disabilities, saying the Department of Education's Civil Rights Data Collection indicates eight in 10 of all students physically restrained in Nebraska in 2013-14 (the most recent data set available) were disabled, and that minority students were overrepresented among the numbers of restrained students in Nebraska.

"In about 80% of cases that restraint is used it is on a child with a disability," said Edison McDonald, executive director of the Arc of Nebraska. While some may say it is about safety, it is truly about not taking the time or consideration to properly train staff to ensure the safety of people with disabilities.

Others lobbying against the allowance of additional force say there's already protections for adequate classroom discipline.

“The current law, under the Nebraska Student Discipline Act, already permits teachers and administrators to take reasonable steps necessary in discipline matters," Dr. Michael Dulaney, Executive Director of the Nebraska Council of School Administrators. "A more productive legislative pursuit would be for the state to provide funding to train certificated staff, including training to defuse difficult situations in the classroom.”

Teachers in Nebraska may soon have the right to physically discipline students they feel are acting out in a threatening way. ⁦@WOWT6News⁩ pic.twitter.com/j6l9RkYj53