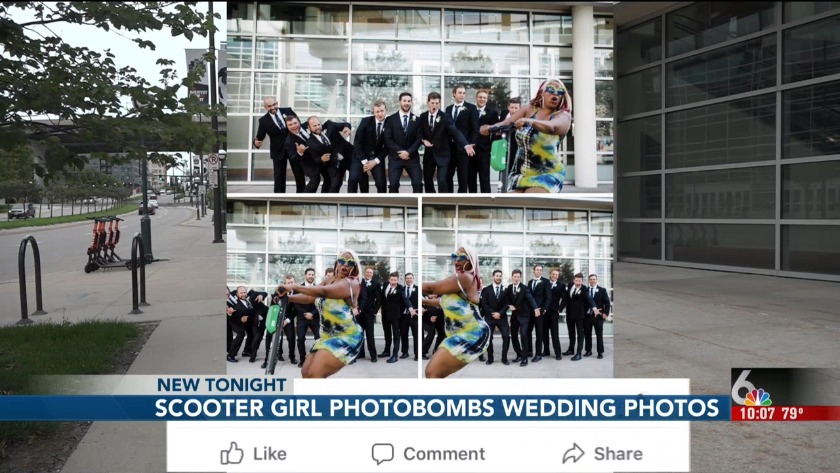 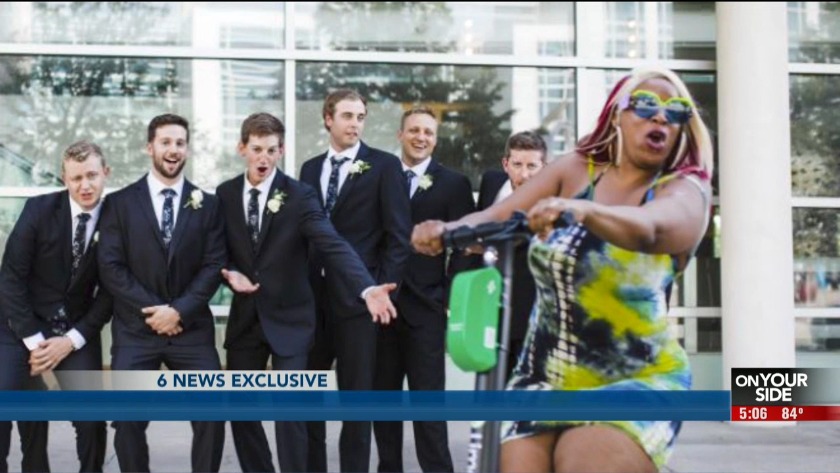 OMAHA, Neb. (WOWT) -- You might have seen the photos of the now modestly infamous Scooter Girl that have been making the social media rounds in the metro.

Her wedding photo bomb was over in a flash and like all Superheroes she vanished when her work was done. That begged the question: who was that Scooter Girl?

Lileana Pearson was responsible for a reunion of the key players involved.

The moment captured in the picture happened in front of the Hilton Hotel, across from CHI Health Center. Scooter Girl took a wedding party and Omaha by storm.

We know her as Scooter Lady but friends and family know her as Kenyatta Jefferson. An Omaha local, she and her husband were embarking on their first-ever scooter rides when she saw them: a group of groomsmen taking wedding photos in the blistering heat of June 22nd.

She knew this was her moment. Kenyatta is a self-proclaimed prankster and she said she just decided to go for it. Her performance won the cheers of the wedding party.

Kenyatta said it was so much fun the first time she decided to do it again.

Photographer Molly Giangreco snapped the photo that lit the fuse to the powder keg that's become the Scooter Lady saga. The groom and his friends posed for a photo set that now has more than 4,000 reactions, nearly 400 comments and shares topping 2,000.

Kenyatta sped away with a wave leaving everyone in wonder.

Molly asked for help through Facebook and less than an hour later they found her.

Kenyatta said, “I was laughing. Never thought I would see the picture. I thought about it last week and yesterday my friend from work sent me a picture and I was like, ‘Oh my God. Where did you get this picture?’ And she was like, ‘another co-worker,’ and then I got on Facebook and I had so many tags. Everyone tagging me on this picture.”

The groom, Matt Reilly, and his new bride Makayla both love the picture. Matt said this is a memorable moment he will keep with him forever.