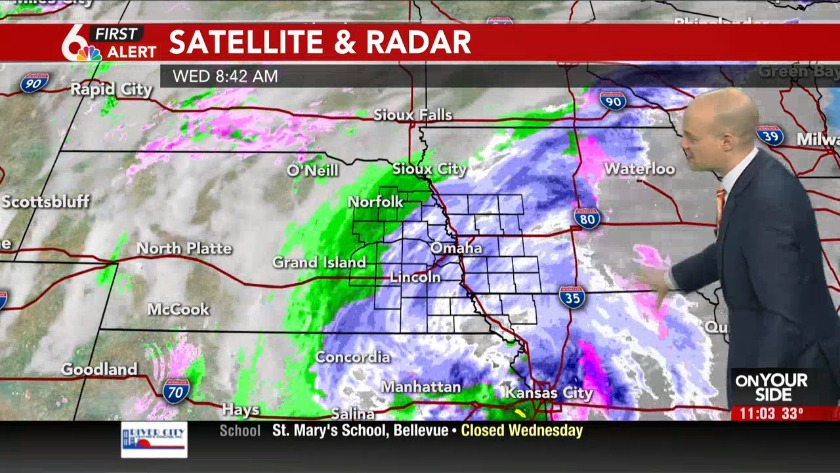 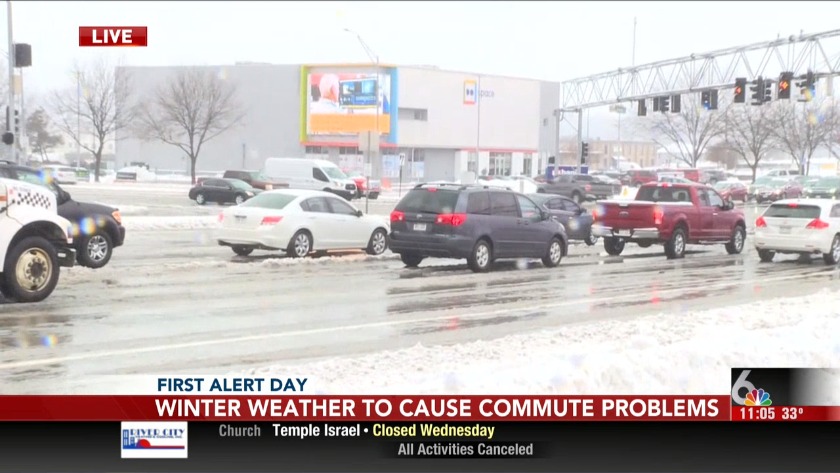 OMAHA, Neb. (WOWT) -- Wet snow in above-freezing temperatures made for sloppy road conditions around the Omaha-metro on Wednesday morning. Many schools around the area called off classes, and Omaha Police were on accident alert at the start of the morning commute.

Below are the latest 6 News updates on how the weather is affecting the area.

PHOTOS & VIDEOS: Share your weather pics & vids with us today!

3: 19 p.m. -- Wednesday trash and recyling collection in Omaha has been suspended as a result of today's snowfall, according to a release from the Public Works Department.

9:44 a.m. -- Several crashes on southbound Highway 75 near L Street have led police to close access at southbound I-480. Traffic is being diverted onto I-80.

Tow on scene. Shouldn't be too much longer now. pic.twitter.com/LppnRpkCOt

JFK SB is closed at the 480 split. You will be diverted onto I-80. Several crashes on JFK just north of L St have all lanes blocked. I-80 WB and EB appears to still have access at this time, but 480 SB does not. @wowt6news #FirstAlertTraffic pic.twitter.com/eCA0SCdqRA

6:16 a.m. -- Ashly Richardson gives an update on how the morning snow has impacted Omaha streets so far.

Travel is difficult on side roads this morning. This is a look at 168th and Poppleton Ave. the roads are snow covered. Snow continuing to fall. @WOWT6News pic.twitter.com/NBJAJI9iqG

4:45 a.m. -- Ashly Richardson is out checking on street conditions in West Omaha:

Roads are mostly snow covered this morning and there are slick spots. Snow is still coming down right now. This is a look at 144th and Blondo. @WOWT6News pic.twitter.com/vtrFzSBhxW