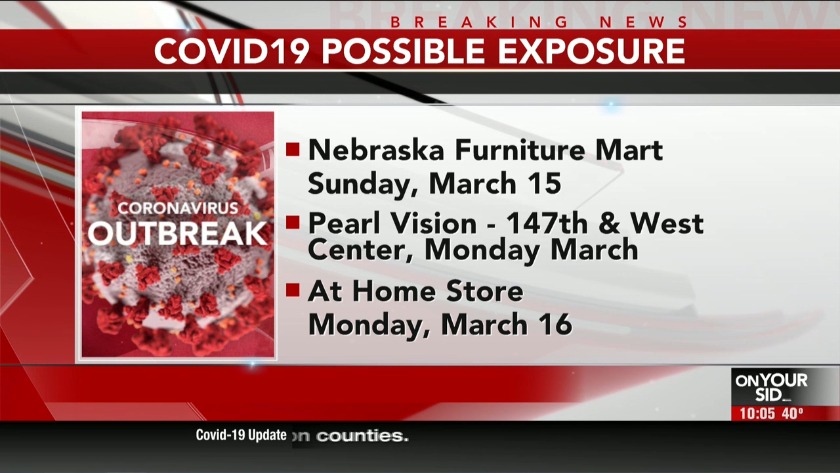 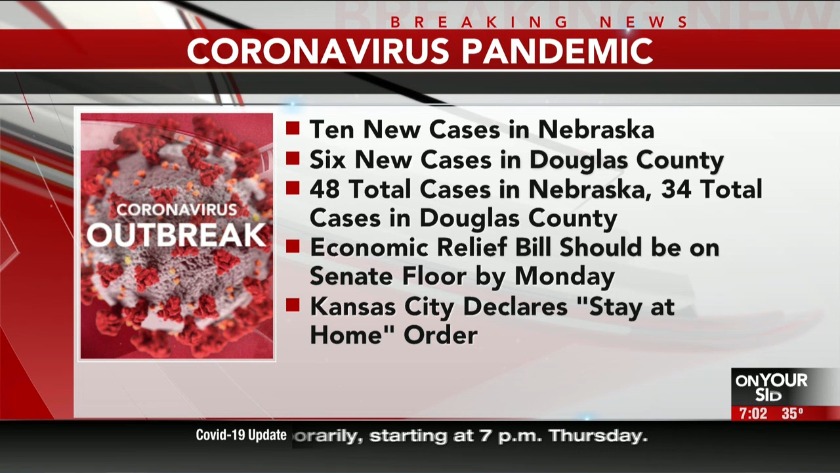 What we know now: Coronavirus 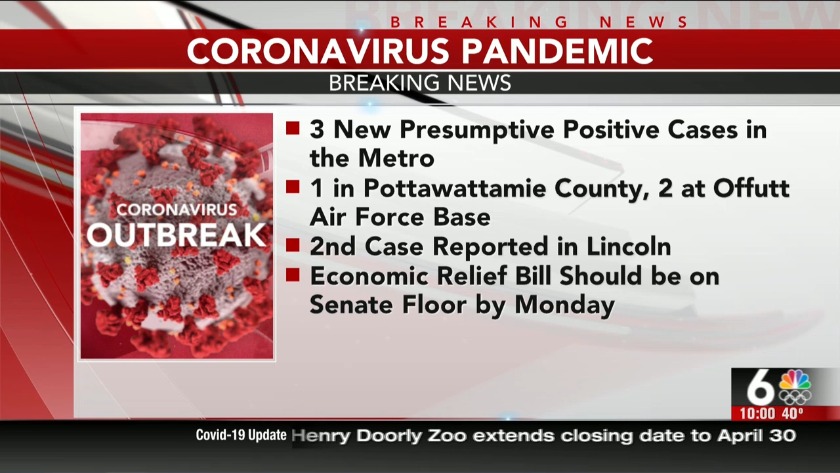 (WOWT) -- The Nebraska Department of Health and Human Services confirmed 10 additional cases of COVID-19 were identified in three Nebraska counties on Saturday.

With testing "ramping up" in Douglas County, the health department said in a release Saturday night, six more cases of coronavirus have been identified in the area.

Six more people tested positive, according to the DCHD release: three are travel-related, and three are contacts of a positive case. The latest cases bring the county's total to 34. The state health department is reporting Nebraska’s total is 48.

DCHD said the two travel-related cases, described as a man in his 30s and a man in his 60s, were confirmed positive late Friday, and further investigation was conducted Saturday.

Additional cases are under investigation, the release states.

“We anticipated that increased testing would uncover more cases of COVID-19,” Health Director Dr. Adi Pour said in the release. “That has proven to be the case. Both are experiencing mild symptoms and are self-isolating while recovering at home.”

The latest reports of community spread has prompted the county's health department to advise precautions be taken everywhere, not just in locations previously listed as having the potential for exposure, according to the release. The DCHD release also noted that many sick with the virus have mild or no symptoms at all.

The CDC has reported that most who have become ill with coronavirus contracted it from someone who didn’t know they had it, the release states.

"That means there are likely many more people in the community who are infected with COVID-19 than have been reported," the release states.

Offutt Air Force Base officials announced two presumptive positive cases on Facebook earlier Saturday: a husband and wife who are experiencing mild symptoms and are being monitored by medical personnel, according to the post.

A day after Lincoln officials confirmed a 48-year-old resident as the city's first case, they have confirmed a family member as its second.

Lincoln Mayor Leirion Gaylor Baird and the Lincoln-Lancaster County Health Department said in a news release Saturday that the family member developed symptoms Wednesday and has been self-isolating at home since then. This person had limited exposure to others in the community, according to LLCHD, and close contacts are quarantined.

The previous positive case had traveled to Colorado on March 8-9, developed symptoms on Sunday, and visited his health care provider on Monday, according to the release. The man, who continues to self-isolate at home, has mild symptoms, the release states.

Health officials said Saturday the man had visited two public locations — both in Omaha — before becoming symptomatic. The exposure sites and timeframes are:

Anyone who was at these places during the listed times is avised to self-monitor for 14 days following their exposure and contact their health care providers for further direction should they develop systems during that time.

The Lancaster County health officials are now monitoring 172 individuals, according to the release. The district reports it has found 84 people negative for COVID-19 and has three cases pending, the release states.

“Until we have a vaccine for COVID-19, our community’s faithful compliance with social distancing guidelines remains the best defense against the coronavirus,” Lincoln Mayor Leirion Gaylor Baird said in the release. “If you have a respiratory illness or influenza-like symptoms — fever, cough, or shortness of breath — stay home and contact your health care provider or the Health Department hotline at 402-441-8006 for guidance.”

Another case in Buffalo County


Another case was identified in the Kearney area on Saturday: the Buffalo County man is in his 50s — a family member of the case announced Friday.

He is currently self-isolating at home, according to Two Rivers Public Health Department.

Meanwhile in Iowa, an additional 23 positive coronavirus cases — including two in Pottawattamie County — were confirmed Saturday, bringing the total there to 68 cases.