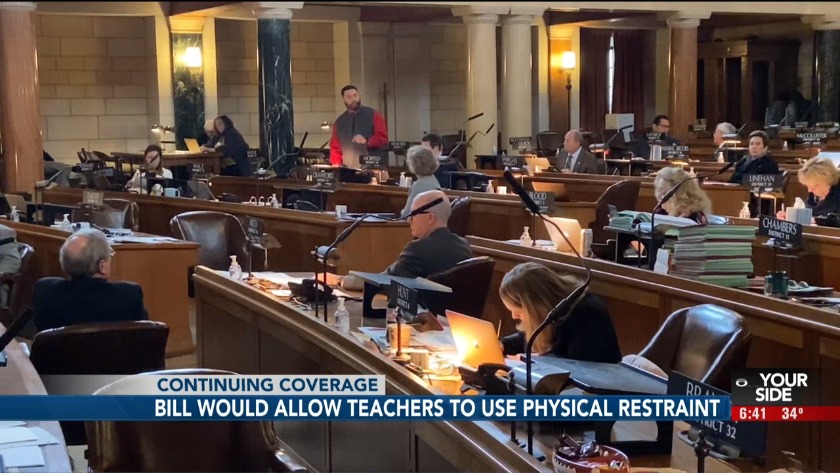 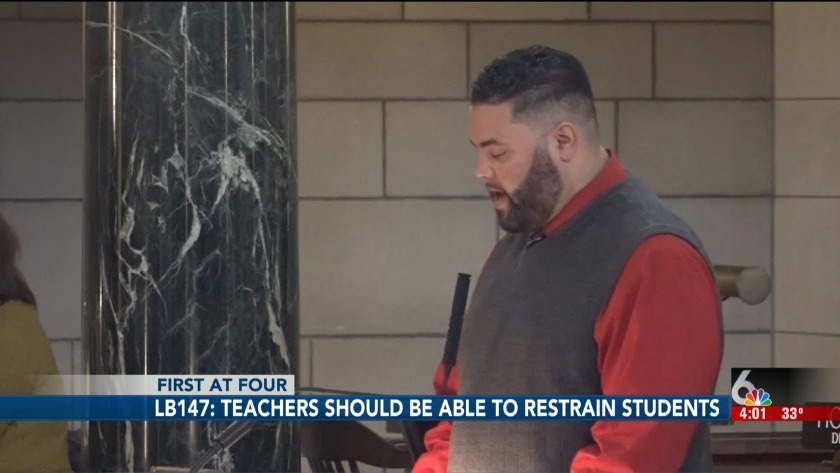 LINCOLN, Neb. (WOWT) -- State lawmakers gave one last push Monday on both sides of the debate on whether to grant teachers the ability to use physical force on students.

Sen. Mike Groene makes his case on Monday, Jan. 13, 2020, at the Nebraska State Capitol in Lincoln for LB147, the bill he introduced last year that would give teachers the go-ahead to use physical restraint when a student’s behavior is believed to be a physical threat. ⁦(Tara Campbell / WOWT)

With parents, teachers, and child advocates watching, lawmakers debated for three hours about LB147, known as the Student Discipline Act. The bill has been through a few amendments, but essentially allows teachers to physically remove a student from the classroom if they are believed to have become a safety threat or act out in a threatening way.

After about three hours of debate, the speaker put the bill on hold. In order to bring the debate back to the floor, State Sen. Mike Groene, who introduced the bill last year, now has to show he has the support of 33 senators.

A busload of people in opposition to the bill showed up at the state capitol this morning to watch lawmakers battle it out. The debate came down to a lot of back and forth between State Sen. Justin Wayne and Groene.

Wayne argued the bill extends too much power to too many untrained people.

"If you're at OPS — and we have maintenance people and carpenters — they can intervene with physical intervention, without any training, and be immune from criminal prosecution or civil liability," he said.

But Groene called the bill necessary for everyone's safety.

"A gun shows up in the hall, and the janitor might be the first to see it," he said. "A fight with a knife in the cafeteria — the cook is the first-responder. They need to be trained."

As the bill stands now, there is no training required for teachers or personnel, but Groene said he's willing to write training into it to help get the support of 33 senators he needs, for the bill to stay alive.

The bill was put to the floor last May, but stalled after it was deadlocked in committee.

The Nebraska State Education Association made a push for the bill last week, but opponents expressed concern such a law would result in force being used disproportionately against students of color or with disabilities.

"LB147 does nothing to address the systems of discrimination," State Sen. Machaela Cavanaugh said. "It makes them worse."

A mother with her two children, one of whom is disabled. She is among a contingent of people at the Nebraska State Capitol today, opposing LB147. ⁦@WOWT6News⁩ pic.twitter.com/zwCmVUcCP8

The primary concern for those opposed: The lack of training for teachers and personnel. Another bill is expected to be introduced today that would outline that training.

Sen. Mike Groene making a case for LB147. He introduced the bill last year, giving teachers the go ahead to use physical restraint when a student’s behavior is believed to be a physical threat. ⁦@WOWT6News⁩ pic.twitter.com/2UkXqfNjDZ

A mother with her two children, one of whom is disabled. She is among a contingent of people at the Nebraska State Capitol today, opposing LB147. ⁦@WOWT6News⁩ pic.twitter.com/zwCmVUcCP8