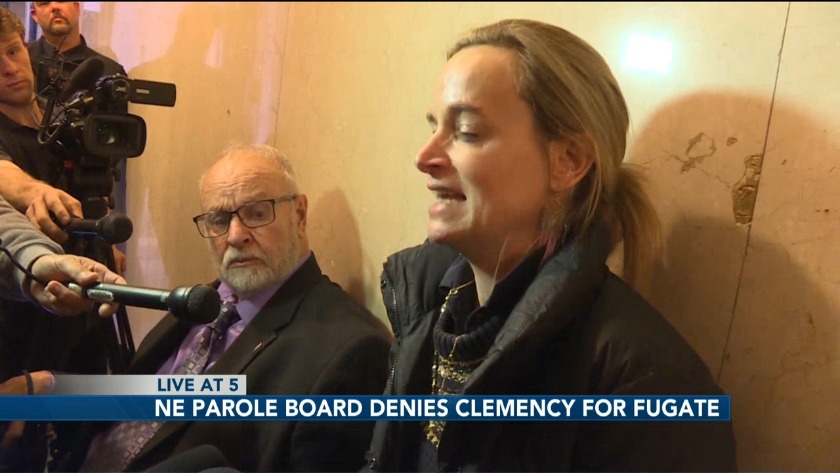 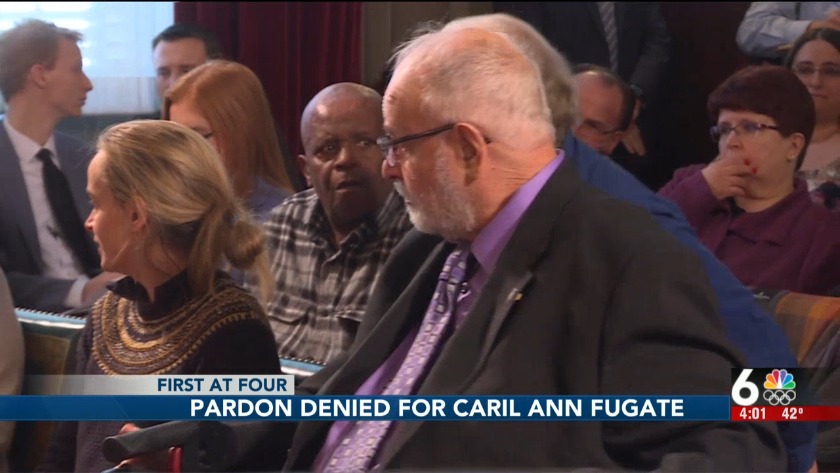 LINCOLN, Neb. (KOLN) -- It only took a few minutes Tuesday for the Nebraska Board of Pardons to deny an application for clemency from Caril Ann (Fugate) Clair.

Fugate accompanied her older boyfriend, Charles Starkweather, during a string of killings and is seeking an official pardon, saying she was 14 years old at the time and that he had threatened to kill her family if she didn’t obey.

Fugate, who is now 76 and goes by her married name of Caril Ann Clair, said in her Nebraska pardon application she’s seeking peace of mind as she ages. She was 14 years old when she accompanied her 19-year-old boyfriend, Charlie Starkweather, on a bloody journey that left 11 people dead, including her mother, stepfather and baby half-sister, before the pair was arrested in Wyoming.

The Governor's Hearing Room was packed Tuesday as a total of 59 people were asking for a pardon.

Clair's request was denied as the pardon board said "the request was beyond its scope," since her commutation and prison sentence.

Starkweather was charged with 11 counts of murder but went to trial for only one. He was convicted and executed by electric chair on June 25, 1959.

Clair was charged in only one of the killings and was convicted and sentenced to life in prison. Her sentence was later reduced and she was paroled in 1976.

Clair asked to be pardoned for the following convictions:

In her pardon request, Clair, who now lives in Hillsdale, Mich., said the Nebraska Board of Pardons has a chance to right a historical wrong.

"The idea that posterity has been made to believe that I knew about and/or witnessed the death of my beloved family and left with Starkweather willingly on a murder spree is too much for me to bear anymore,” Clair wrote in her 2017 application. “Receiving a pardon may somehow alleviate this terrible burden.”

The infamous saga, which inspired the 1982 Springsteen song “Nebraska” and the 1973 film “Badlands” starring Sissy Spacek and Martin Sheen, began in November 1957 when Starkweather robbed and killed a 21-year-old gas station attendant in Lincoln. On Jan. 21, 1958, authorities say he went to his girlfriend’s house and killed her three family members after her mother and stepfather told him to stay away.

Starkweather said Clair was home the entire time, but she said she wasn’t and that when she got home, he met her with a gun and told her that her family was being held hostage and wouldn’t be killed if she obeyed him. The two then set off and weren’t captured until eight days later near Douglas, Wyoming, which is nearly 470 miles west of Lincoln.

Nebraska Attorney General Doug Peterson said, "it's important as you look at the purpose of the request and understand that's not the role of the pardons board."

"We can't come in and alleviate the burden she feels for this case," he added.

In her request, Clair said a pardon would represent only a formal forgiveness of her crime, which she says she committed in mortal fear.

“When I was 14 years old, I was abducted and held captive by Charlie Starkweather. I was terrified and did whatever he wanted me to,” wrote Clair, who acknowledged she was present when one of the victims was shot and that she did hold the money taken from him.

“I lived in constant fear for my family’s safety. Because I loved them with all my heart,” Clair wrote.

Among those who submitted letters in support of her pardon request were: a granddaughter of two of Starkweather’s victims, two of Clair’s stepsons, a former prison warden and a Michigan woman who hired Clair as a nanny.

Clair was not expected to be present at the public meeting. The four relatives of the victims who hoped she would be pardoned were disappointed.

However, Dave Ellis, who's cousin, Carol King, was murdered by Starkweather, said he did not want Clair to be pardoned.

"(King) was only 16 years old. She deserved to have a full life and this is a hell of an honor for her that (Clair) did not get her pardon," Ellis said.

1011 Now and The Associated Press contributed to this report.

Full house in Governor's hearing room as 59 people ask the state for pardon. Dozens are waiting their turn in overflow room. The big story is the notorious spree killer Charles Starkweather connection. Will Caril Ann Fugate-who was 14 at the time-be pardoned? Watch live at 2pm pic.twitter.com/M3eXZYOuf7