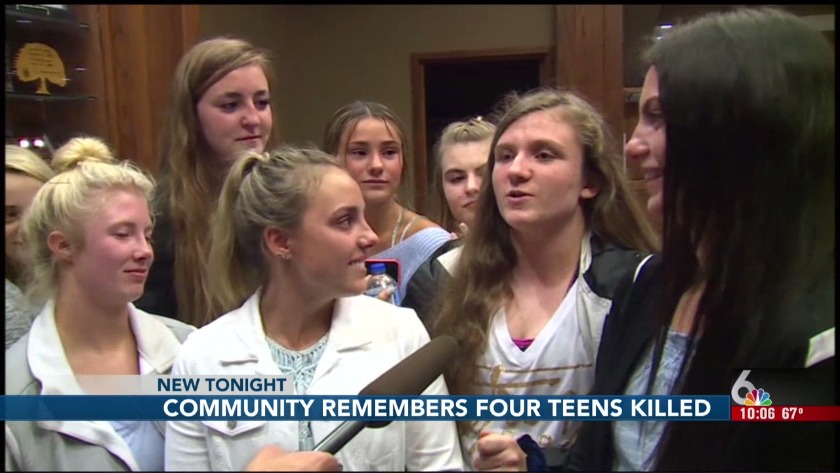 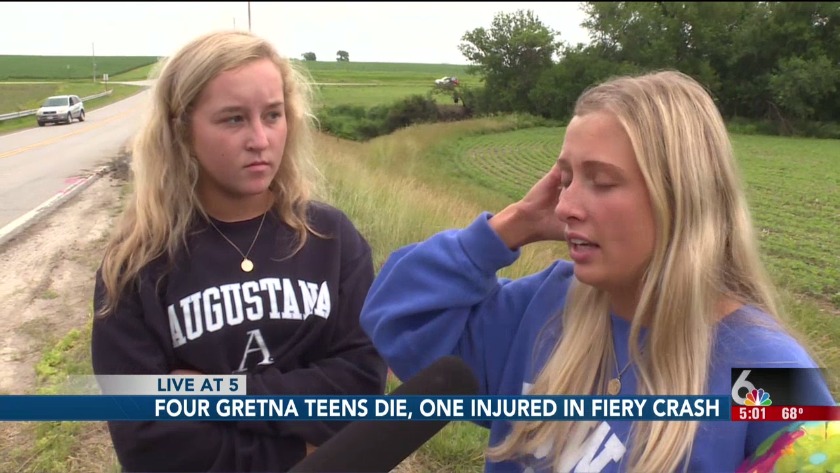 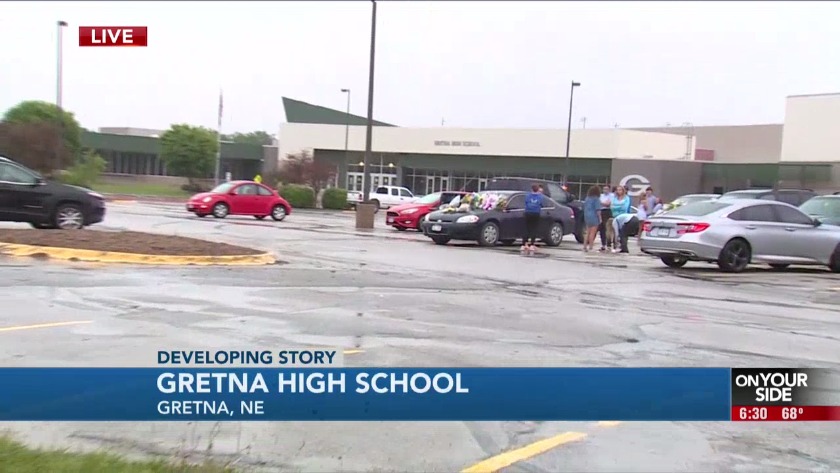 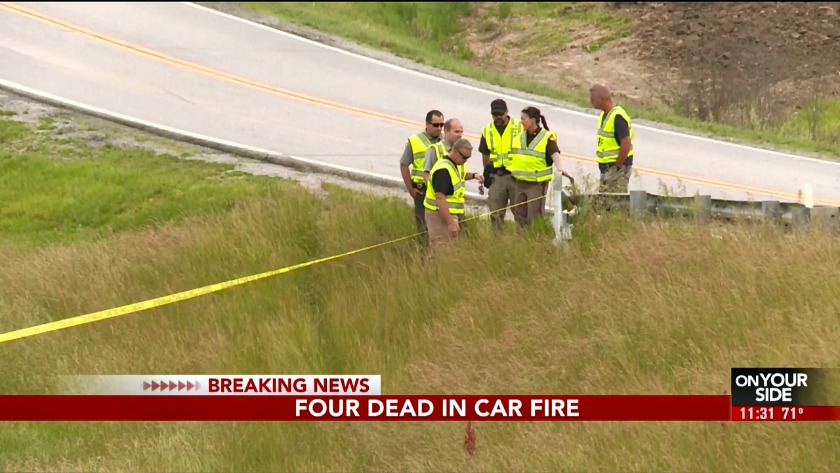 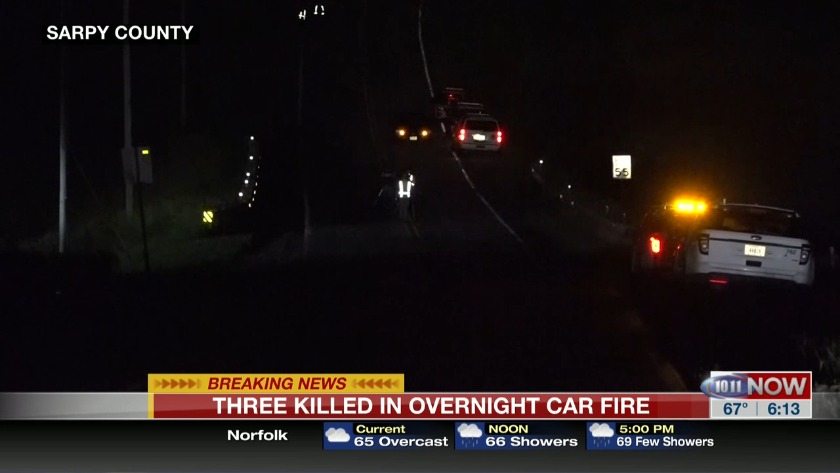 Five teens were riding in a Ford Fusion late Monday when they crashed here, near 180th Street and Platteview Road. The vehicle caught fire. Four of the teens were pronounced dead at the scene. (Mike Plews / WOWT)

The fifth student was transported to St. Elizabeth’s in Lincoln with burns after the crash, which happened just after 11 p.m. Monday near 180th Street, Sarpy County Sheriff's Office officials said.

Authorities said a Ford Fusion was eastbound on Platteview Road when the vehicle went off the road. Investigators said the car hit a guardrail, went into a ravine, and caught fire. Sarpy County officials said the car was engulfed in flames when they arrived at the scene.

After the crash, Platteview Road was closed to westbound traffic at 169th Street for several hours. It's a stretch of road that's not unfamiliar with tragedy. Some parents told 6 News they won't let their children drive on Platteview Road.

Along this road just after midnight on December 2006, two teenagers died when the car they were traveling in left the road, vaulted a creek, and rolled several times.

Today, again, Sarpy County investigators were marking the trail of another fatal crash. Still early in their investigation, the Sheriff's Office is trying to determine what factors played a role in the crash.

Sarpy County investigators were still at the scene hours after the crash, spending most of Tuesday combing through the spot where the car left the road hit a guardrail before it ended up in a ravine and caught fire.

The Sheriff's Office said names of the victims will be released when they are positively identified and families have been notified.

Platteview Road was closed during the investigation.

About 9:30 a.m. Tuesday, classmates and friends drove to the site of the crash, where they planned to place flowers to start a memorial, but Sarpy County deputies asked them to leave, telling the students the roads out there were just too dangerous.

Back at the high school, other students gathered to mourn. Gretna school officials say the five girls were very close friends all attended Gretna High School.

"We all kind of knew these girls, and it's just something that hurts everyone."

Friends of the victims, Mia Huffman and Maddie Peterson are students from Millard West. The two left flowers at the crash site — a reminder of what happened here and a memorial to their friends.

For some of them, the loss of their young friends makes them realize their own mortality.

Grief counselors will be at the high school to help students cope with the tragic events.

GHS Principal Roger Miller sent a letter to parents Tuesday with some information about the crash:

I was informed last night that five of our high school students were involved in an accident at 180th and Platteview Rd. Four of these students were pronounced dead at the scene while a fifth was sent to St. Elizabeth’s in Lincoln. Names have not been released yet to the public by the sheriff’s office so I cannot share that information with you at this time.

Our school crisis team met earlier this morning. The High School building will be open today starting at 8:30 a.m. with counselors available for any students.

Parent / student resources for death and grief can be found on the front page of our district website.

A memorial service for the victims is planned for 7:30 p.m. Tuesday at St. Patrick's in Gretna.

Sheriff's Office and Gretna Public Schools officials said they plan to have a press conference at a later date to share more information about the crash.

In a report issued at 5:15 a.m. Tuesday, Sarpy County officials said they had not yet identified three of the vehicle's occupants, "but we believe we know who they are."

Area school and municipal officials shared their condolences on Tuesday.

In a statement by the City of Gretna, Mayor Jim Timmerman said:
"To the families who are suffering from the tragic accident, the City of Gretna expresses heartfelt sympathy. The entire Gretna Community shares in your pain, grief, and sadness. On behalf of the citizens of Gretna and the Gretna City Council and staff, our thoughts and prayers are with you."

Today, we are all Gretna Dragons. The staff and students of PLCS are sending thoughts and prayers to our friends in Sarpy County. We are so sorry for the loss of your four students. pic.twitter.com/DF7ueFDNAD

All of us @MillardPS are praying for our friends in Gretna today. We are so very sorry for your loss.

Our thoughts and prayers are with the Gretna community tonight as they mourn the loss of four Gretna students. The students were killed in a car crash in Sarpy County late Monday night. We support their families, friends and loved ones during this difficult time. pic.twitter.com/hQ4cLN61bq

Prayers & thoughts to the families & friends of the Gretna teens who lost their lives in the car accident yesterday. We pray God provides comfort & healing as well to the victim who is recovering. For help dealing with grief & loss: https://t.co/DbDGk1YtTt