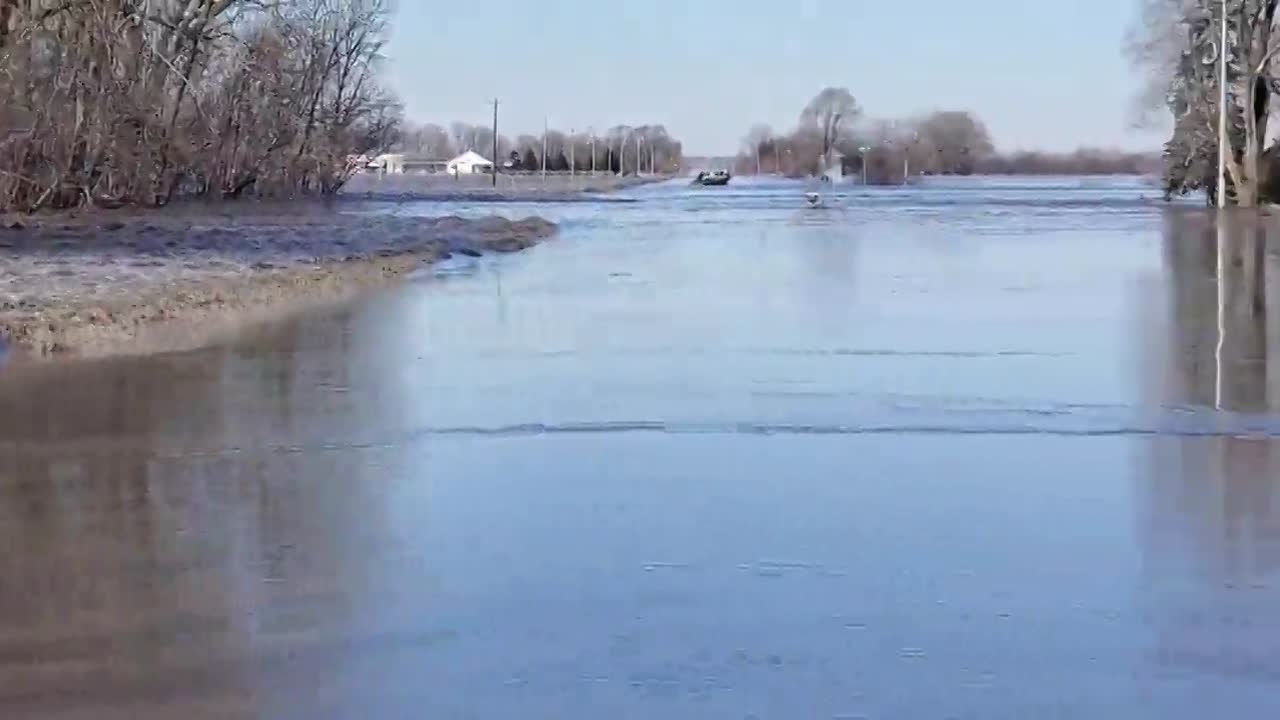 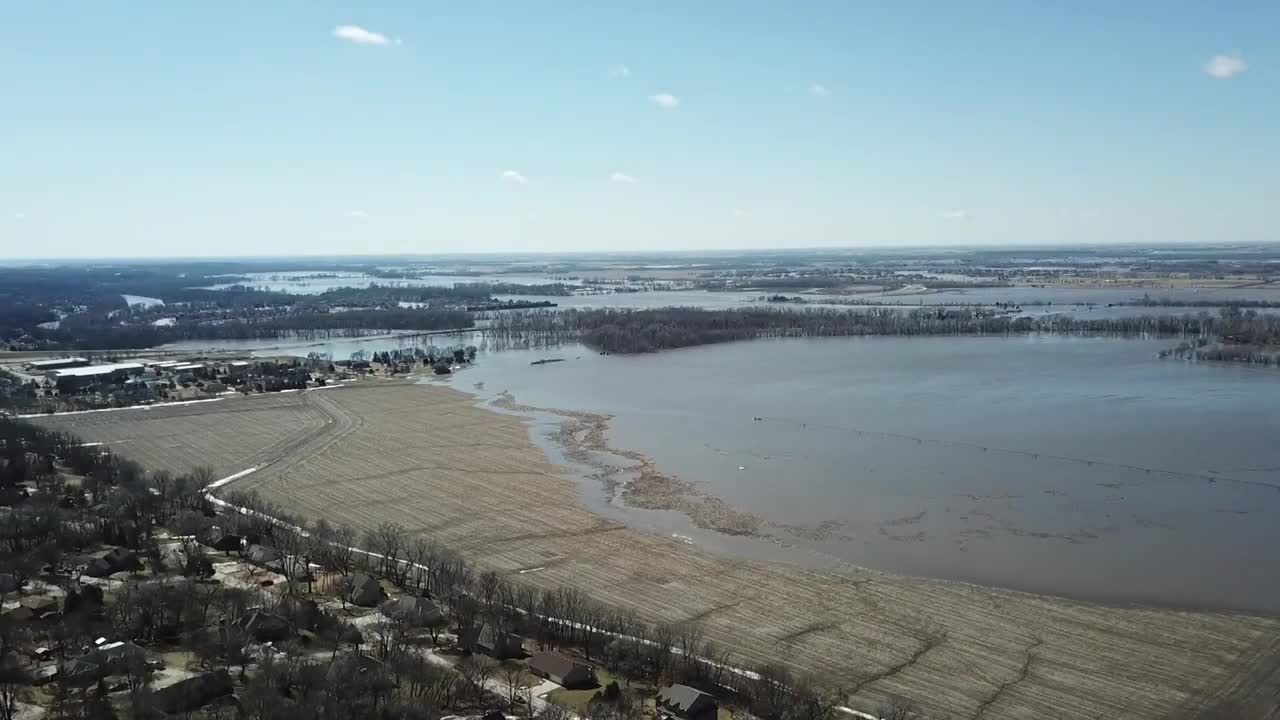 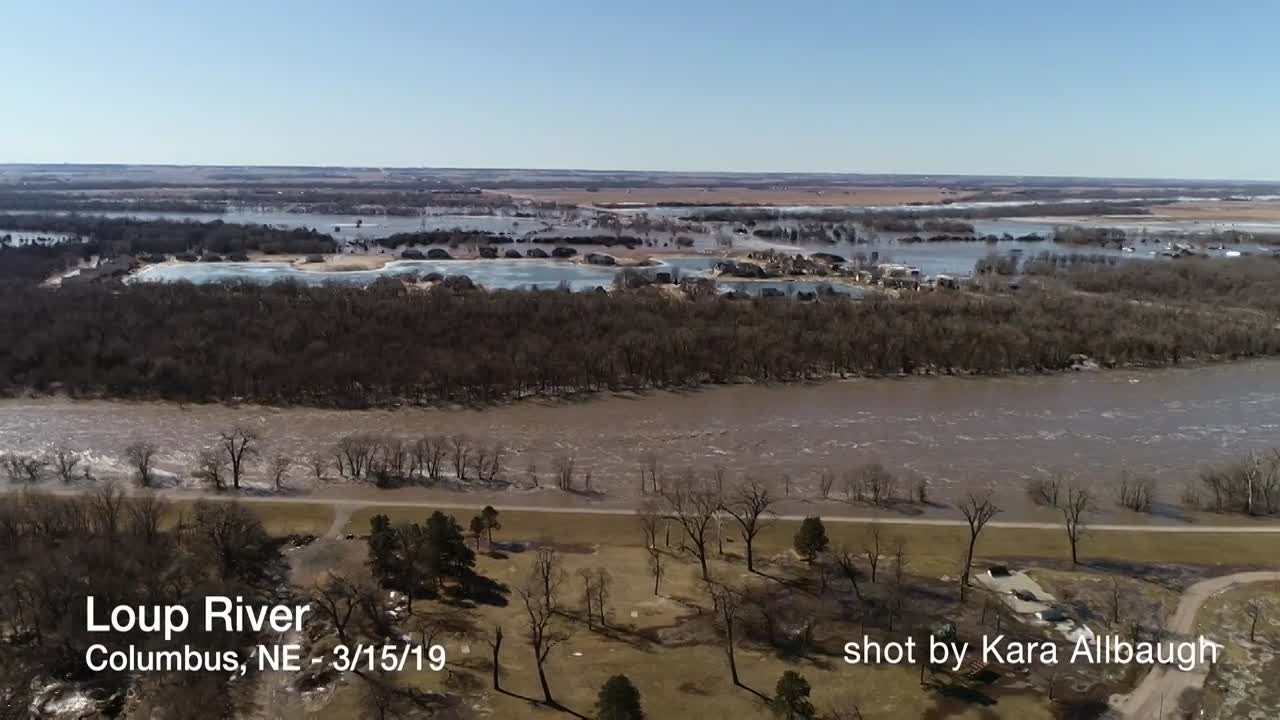 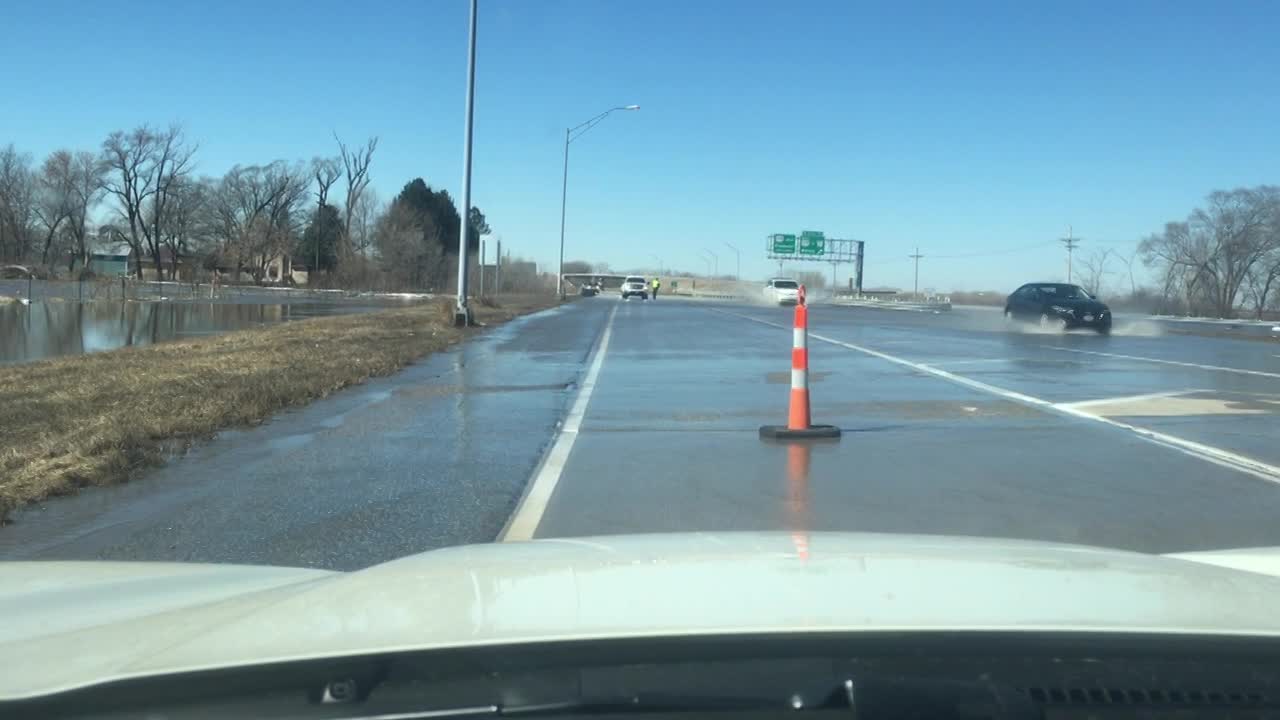 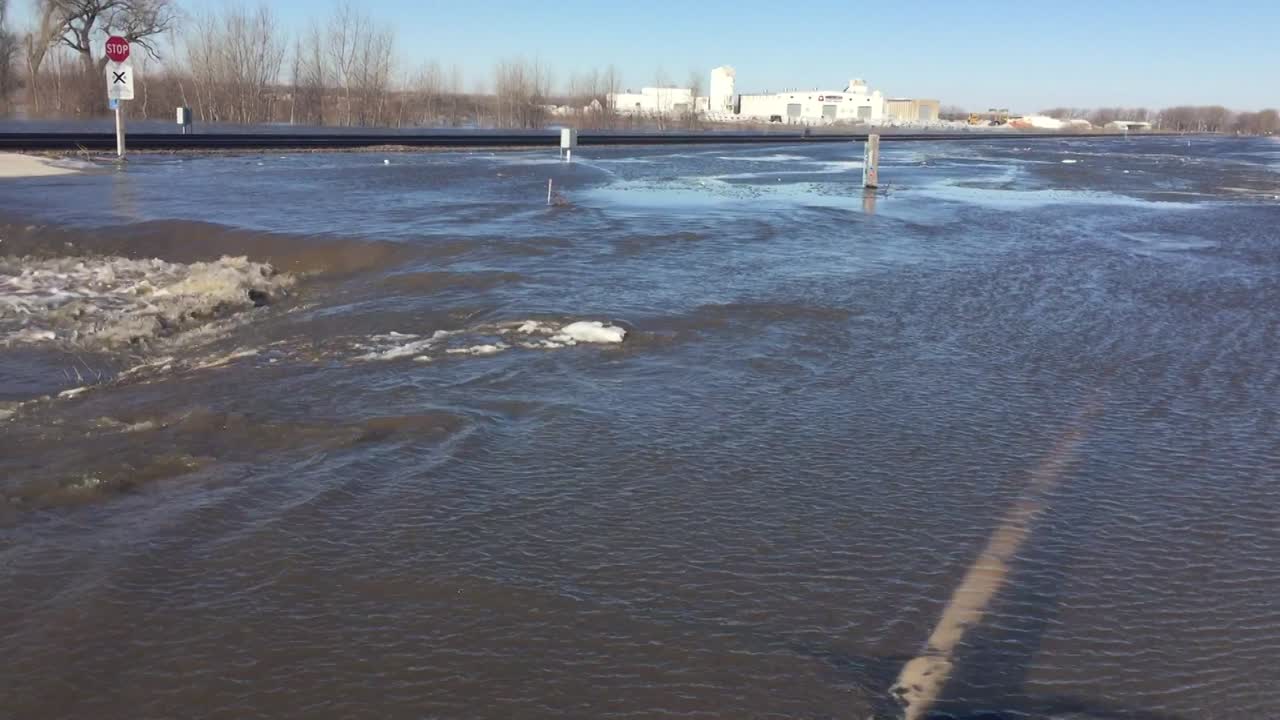 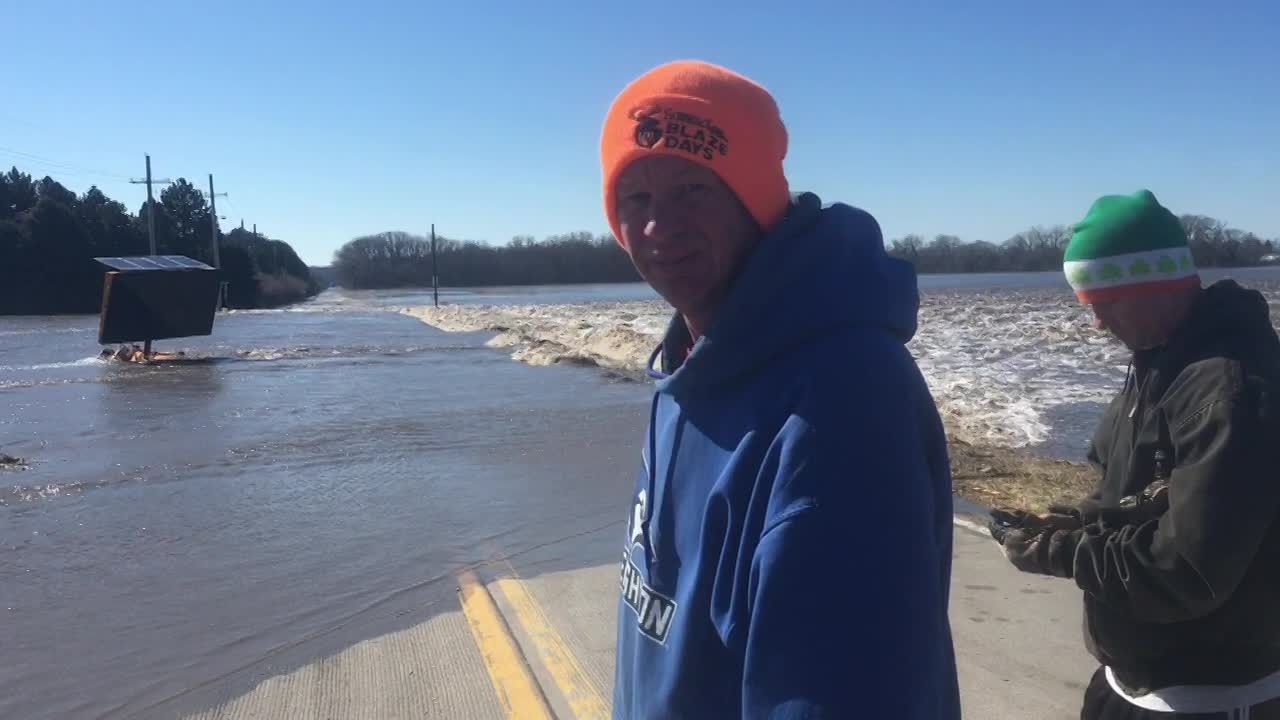 Below are the latest flooding and weather-related reports throughout the region for Friday, March 15:

Nebraska State Patrol was restricting access to Q Street as a detour to Valley and Waterloo on Friday afternoon, March 15, 2019, before it flooded over.

10:57 p.m. -- Fully involved house fire reported on La Platte Road with fuel and propane on site, according to Bellevue Police. Bellevue Fire was en route after crews decided how best to access the fire due to flooding in the area.

9:47 p.m. -- A mandatory evacuation has been issued by the Douglas County Sheriff's Office for Meadowbrook, Westlake, Ames and surrounding areas near the Platte River in Fremont. Residents are advised to seek shelter at Trinity Lutheran and Salem Lutheran.

8 p.m. -- Salvation Army will collect donations at the former Canfield's store, at 84th and Center, in the coming days for distribution in northeast Nebraska and Southwest Iowa. [DETAILS]

7:08 p.m. -- Nebraska Gov. Pete Ricketts has issued an executive order directing the Nebraska State Patrol to waive length and weight requirements for trucks traveling into and through the state until April 15. “This will help move materials more efficiently around the state as we work together to respond to the impacts of the flooding and severe weather," said in a release announcing the order.

Nebraska is working with surrounding states to encourage them to temporarily ease restrictions as well, the release states.

"If residents are not rescued by this time, they will need to shelter in place until morning," the release states.

Residents needing emergency assistance can still call 9-1-1 during this time.

6:49 p.m. -- Douglas County Sheriff's Office deployed its MRAP, or Mine-Resistant Ambush Protected vehicle — a former military vehicle — to help in rescue efforts tonight. It's currently staging at the Waterloo Fire Department near a large incident command set up. The military surplus vehicle was purchased several years ago by the county.

5:30 p.m. -- Q St. over the Elkhorn River closed, cutting off the last route to get to Valley and surrounding towns.

5:15 p.m. -- Mills County, Iowa, issued a mandatory evacuation for residents in the area from Gaston Avenue south to Waubonsie Avenue, between the Missouri River to the west and Interstate 29 to the east, because floodwater topped a levee in the area.

4:35 p.m. -- Sarpy County officials released an update on flood operations in the county, pointing out that approximately 2,600 people live in evacuation areas.

Sarpy County evacuees should go to Lifegate Church in Papillion if they need shelter and support until 8 p.m.

3:49 p.m. -- Unified Command recommends voluntary evacuation of Valley; evacuees are advised to leave as soon as possible in their own vehicles. Access in and out of Valley is limited, with access only available east and west along Q Street. [MAP]

3:20 p.m. -- The Heartland Equine Therapeutic Riding Academy is preparing their barn to receive horses displaced by flooding, providing owners can get their horses safely to Gretna. [INFO]

2:56 p.m. -- Emergency officials in Fremont are asking people to shelter in place as the water is too deep for rescuers, and because there are reports of water beginning to slowly recede in that area.

2:30 p.m. -- The City of Council Bluffs has begun to take precautionary measures as the Missouri River rises, issuing the following closures:

River’s Edge Pavilion and Plaza, the trail system along the levee, and the Council Bluffs entrance to the Bob Kerrey Pedestrian Bridge remain open as flood waters aren’t expected to reach the levee.

2:23 p.m. --The City of Bellevue issued a statement encouraging all residents of Paradise Lake and Green Acres to evacuate their homes as soon as possible. Evacuated residents can go to Lifegate Church at Cornhusker and 72nd in Papillion.

Eastbound Highway 370 closed at Warren St. in Bellevue, and westbound traffic is expected to close later in the day.

1:11 p.m. -- Offutt Air Force Base is preparing for flooding as the Base Lake and FAM Camp areas are under an evacuation order, according to a press release from Offutt's public affair's office. Base personnel are "taking necessary precautions to minimize damage in anticipation of flooding."

The 55th Civil Engineer Squadron is working closely with the Army Corps of Engineers, the state of Nebraska and the city of Bellevue to discuss potential flooding issues, the release states.

"More than 20,000 sandbags have been ordered and will be filled by base personnel to distribute throughout the base for the protection of facilities and resource," the release states.

12:34 p.m. -- All lanes of Interstate 29 are now closed from Pacific Junction, near Plattsmouth, to the Missouri state line, according to Iowa 511.

12:08 p.m. -- Southbound Interstate 29 is closed between Highway 34 and Highway 275, near Pacific Junction, and the Missouri State Line, near Hamburg. A detour is in operation, according to Iowa 511.

11:59 a.m. -- OPPD has shut down power at the Papillion Creek Wastewater Treatment, according to a release from Omaha Mayor Jean Stothert. When functioning, the plant treats 65 million gallons of wastewater daily, the release states.

11:39 a.m. -- Nebraska are Department of Transportation is reporting four area bridges along the state highway system are damaged:

"Many bridges will remain closed until bridge inspection can occur," the NDOT release states. "Please do not drive on bridges until they have been inspected and re-opened. Do not drive around barricades."

10:41 a.m. -- Sarpy County officials are encouraging residents living along the Missouri or Platte rivers to evacuate at this time.

10:26 a.m. -- National Weather Service issued a flash flood emergency for Valley after a levee at Union Dike failed. This is expected to cause imminent flash-flooding in surrounding areas, between the Platte and Elkhorn rivers, particularly southeastern Dodge County, western Douglas County, and northeastern Saunders County.

10:20 a.m. -- A nearby broken levee is causing the Papillion Creek Wastewater treatment plant to flood. Water is flooding into the main building where sewage is held. OPPD has been called in to shut off the power. Sand is being trucked in at the site, and workers are monitoring other parts of the levee where water is high.

10:08 a.m. -- National Weather Service in Valley said they are evacuating.

9:55 a.m. -- Voluntary evacuation under way in Valley. The city of Valley is advising residents in the area to be preparing to evacuate, should conditions worsen, and said that officials are monitoring water depths along the Elkhorn River.

8:16 a.m. -- Evacuations taking place in Rogers, according to the National Weather Service.

7:50 a.m. -- Rescue under way at 230th Street and West Maple Road. Omaha Fire, Waterloo Fire and Bennington Fire are at the scene; Douglas County Sheriff's Office has Boat 2 available, should crews there need it.

5:46 a.m. -- In accordance with its protocols, Cooper Nuclear Station issued a "notification of unusual event" when the Missouri River reached 899.05 feet at the plant, according to a release from the Nebraska Public Power District.

"There is no threat to plant employees or to the public," the release states. "The plant continues to operate safely. Appropriate local, county, state, and federal agencies were also notified."

The station's safety and emergency protocols dictate that when the Missouri River’s water level reaches 42.5 feet — or greater than 899 mean sea level — a "notification of unusual event" is declared.

4:25 a.m. -- Douglas County law enforcement shut down West Maple Road at the Elkhorn River because of floodwater. This is in Waterloo.

3:09 a.m. – Rescues south of the metro. Levee reported overtopped about one mile north of the Mills/Fremont County line in Iowa. Evacuations underway. About the same time, a levee north of Plattsmouth was reported overtopped. People in Sands Trailer Court and south side of Hanson Lake #2 urged to evacuate immediately.

12:53 a.m. -- Nebraska State Patrol Lt. Matt Sutter reports rescue workers are in the process of evacuating a family near Highway 30 and the Elkhorn River using a light-armored vehicle.

The flood fight just got a some serious help tonight, the @DCSheriffNE’s MRAP is staging at @Waterloo800 right now. #Flood2019 #newx @WOWT6News pic.twitter.com/ZtRP91Y88F

Troopers have West Center closed now at 222nd Street. Please stay out of the area. pic.twitter.com/rrZTEULMZA

Nebraska State Police have these out, preforming rescues in flooded areas. Watch @WOWT6News tonight for an inside look. pic.twitter.com/WiILrxwdu7

Record flooding occurring on the Platte River at Leshara, and also the Missouri River at Plattsmouth. For river information, please visit our AHPS website at https://t.co/ZU85LY4Iyl #newx pic.twitter.com/JGqhbnPpmo

Good evening, Troop A! Troopers are currently attempting another evacuation of a family near Hwy 30 and the Elkhorn River via our Light Armored Vehicle (LAV). #nspomaha #floodduty2019 pic.twitter.com/iVK69XKzwP