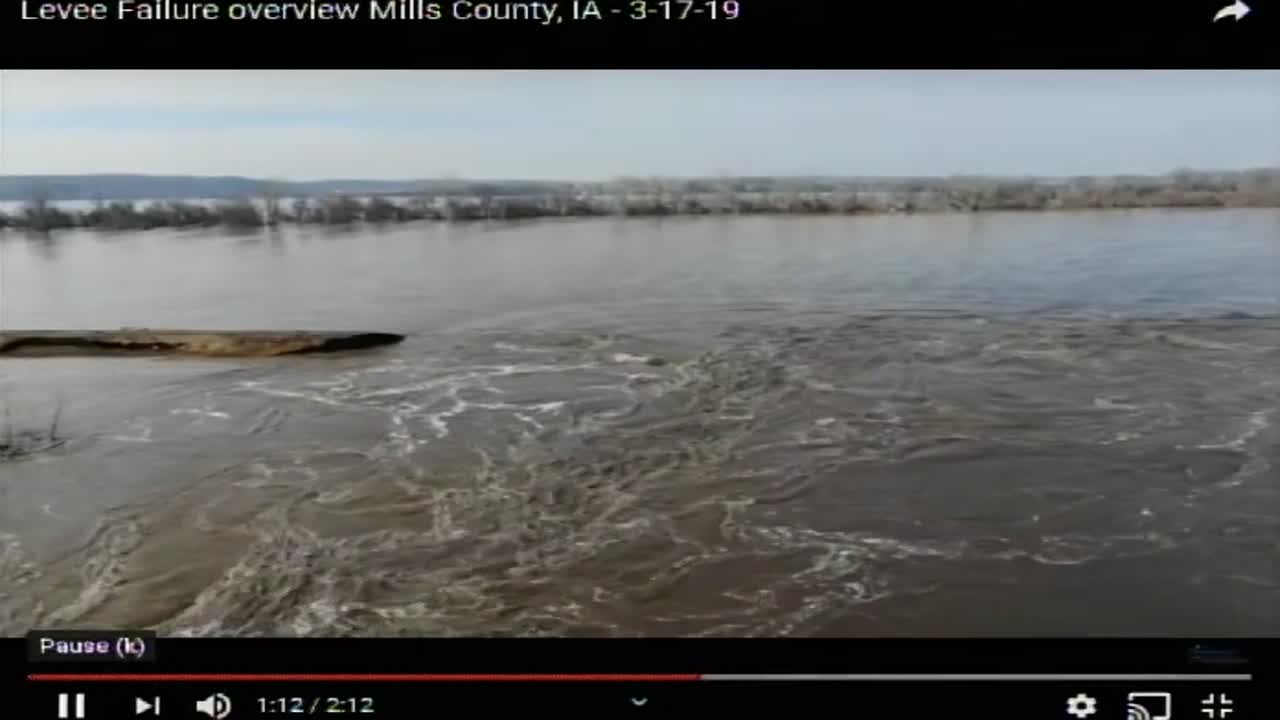 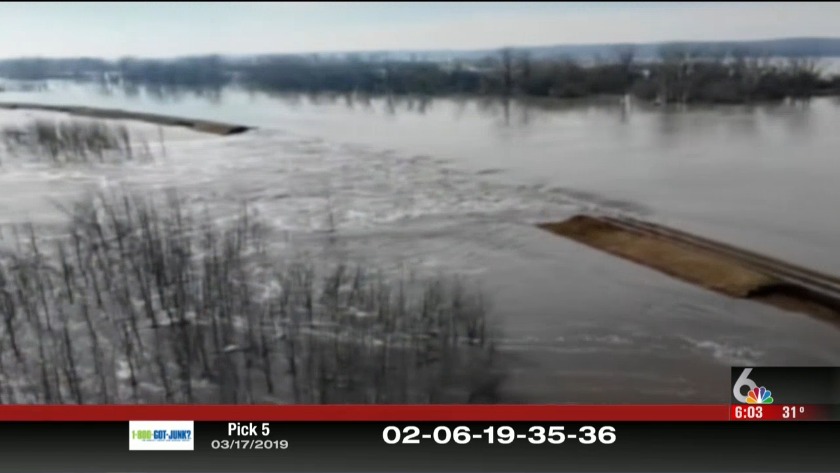 Below are the latest flooding and weather-related reports throughout the region for Monday, March 18:

7:08 p.m. -- Fremont County officials announced they will be issuing civil penalties to people who violate mandatory evacuations and curfews. The first offense is punishable by $750 in fines and subsequent offenses by $1,000.

6:44 p.m. -- Valley and Waterloo will have an 8 p.m. curfew tonight, and non-emergency evacuations will cease at that time.

There are also three known fatalities, according to the agency. One being the farmer who was killed trying to help someone, another from someone who was carried away after they drove into high water, an 80-year-old woman who couldn't be rescued and another person is missing from the Spencer Dam.

The agency said there has also been a $400 million impact to livestock.

FEMA individual assistance will be available to residents of Nebraska for the second time in state history. The first was in 2011.

The state will also submit an expedited request for a federal disaster declaration from President Donald Tump.

6:07 p.m. -- Mills County EMA has set up a Mills County Flood Fund. The donations will go directly to victims in Mills County, not to community infrastructure.

5:48 p.m. -- Unified Command said that as of 3 p.m., 200 adults and children had been rescued in Douglas County since Friday. About 180 miles of Douglas County roads were impacted by the flooding.

4:59 p.m. -- NDOT said that Highway 36 into Fremont has one lane of traffic open. Traffic will follow the direction of a pilot car. Only residents and necessary personnel should travel the space.

4:45 p.m. -- Sarpy County officials said Villa Springs and Beacon View residents can return to their property, but other properties are still being assessed.

4:17 p.m. -- The Archdiocese of Omaha will be collecting donations for flood victims at the upcoming weekend's masses. Pastors will be able to request funds from the archdiocese to aid in recovery efforts.

3:52 p.m. -- President Trump tweets about flooding in Iowa, saying: "My team is staying in close contact with Governor Kim Reynolds (@IAGovernor) of Iowa and the local officials managing these floods. We support you and thank all of the first responders working long hours to help the great people of Iowa!"

3:43 p.m. -- Offutt Air Force Base said normal personnel operations will resume on Tuesday. Those who work in a flooded area should coordinate with leadership. [MORE]

3:11 p.m. -- Attorney General Doug Peterson is asking Nebraskans to donate with care and avoid charity scams. It is best to donate to organizations whose reputations are familiar and is advisable to be cautious of social media fundraisers. Anyone who encounters a suspected charity scam should contact the Attorney General's office.

2:53 p.m. -- M.U.D. said Omaha's water continues to be drinkable and to meet all state and federal standards. [MORE]

2:42 p.m. -- Unified Command said there is still no access to Waterloo and Valley from Omaha, but that crews are working to clear debris from the roads.

Anyone with concerns about pets in flooded areas should contact NHS at 402-444-7800. The shelter is headed to western Douglas County with rescue personnel to check on animals.

Unified Command wants all residents of Waterloo and Valley to register on the Nextdoor app so that Douglas County Emergency Management can send out important messages through the app.

2:14 p.m. -- Millard Public Schools will be collecting donations for the Salvation Army on Wednesday at the Don Stroh Administration Center from 8 a.m. to 5 p.m. The address is 5606 South 147th St.

Mops, buckets, work gloves, rakes, shovels, bleach, and household cleaning items are preferred donation. Money and bottled water will not be accepted at this location.

1:40 p.m. -- Lifegate Church will be hosting a day shelter from 8 a.m. to 4:30 p.m. Monday through Friday at their West Dodge campus. There will be free WiFi, charging stations, coffee, water, snacks, restrooms and rest areas. [DONATE].

Noon -- First Baptist Church in Bellevue is currently housing 160 families and accepting anyone who needs shelter or has a trailer they can park on their lot. They’re in desperate need of formula, diapers and wipes. Some of the women sheltered there are approaching their due dates and have no car seats/cots etc. People are sleeping on air mattresses but pumps are scarce.

10 a.m. -- Glenwood Municipal Utilities requests that customers restrict all water use to indoor needs only. Power to the Glenwood Municipal Water Treatment Facility near Pacific Junction, Iowa will be de-energized due to quickly encroaching floodwater. [INFO]

Hamburg's municipal water customers are asked to use water only as needed. The city lost its water treatment plant due to flooding. Power was shut off to the plant around 5 p.m. Sunday and water began inundating the plant Monday morning. Emergency Management staff members are providing bottled water to residents. The local hospital in Hamburg has been disconnected from the water treatment plant and is utilizing other sources.

8 a.m. -- Clinic Closure: Due to flooding in the community of Valley, Methodist Physicians Clinic in Valley will be closed Monday and Tuesday. [CLOSINGS & DELAYS]

4:08 a.m. -- The situation in Pacific Junction, Iowa has worsened. A mandatory evacuation order is in place after the Missouri River overtopped levees. Gas has been shut off completely and electricity was being cut off as well. An emergency shelter has been made available at Salem United Methodist Church in Council Bluffs off Highway 92. [INFO]